Wikipedia has an article on:
Submachine gun
Wikipedia

A submachine gun is an automatic weapon, smaller in size than an assault rifle, that fires pistol-caliber ammunition. Said term is widely abbreviated as SMG.

Easily maneuvered and with relatively good fire power, SMGs such as the MP5 are used all over the world by military and high-level law enforcement, as well as some criminal organizations.

Following is information about the SMG's available in the Grand Theft Auto world.

The Micro SMG in the GTA series is based on the Israeli Uzi submachine gun. It is one of the most basic SMGs available through the series, often given to the player as an "upgrade" of the Pistol, having an automatic firing mode and being the cheapest of its class.

Through the series, the Micro SMG has changed its appearance multiple times, always resembling a different variant of the Uzi: 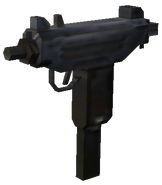 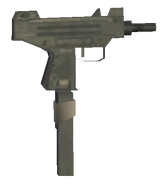 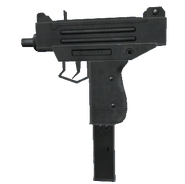 The MP5, (commonly known in the GTA series as SMG) is based on the weapon of the same name. It was developed in the 1960s by a group of engineers from the West German arms manufacturer Heckler & Koch GmbH (HK). It is one of the most widely used submachine guns in the world, having been adopted by 40 nations and numerous military, law enforcement, intelligence, and security organizations.

While the SMG has 30 rounds per magazine, it is often powerful than the Micro Uzi, at the cost of lacking versatility.

Just like the Micro SMG, each game of the series feature a different variant of the MP5:

The Machine Gun is a weapon appeared mainly in the 2D Universe games. It was the earliest form of a rapid-fire weapon that preceded current SMGs featured in the latter games, from Grand Theft Auto III and onwards.

The Silenced Machine Gun is a variation of the original machine gun seen in Grand Theft Auto 2. It adds a suppressor.

Grand Theft Auto 2.
Add a photo to this gallery

The Gold SMG is a gold-plated Uzi. It has the same stopping power, accuracy and firing sound as the Micro-SMG, but faster rate of fire. Due to its nature as a weapon "made of gold", the player's character cannot aim down sights. Instead, it is hip-fired. It is an exclusive weapon featured in The Ballad of Gay Tony. 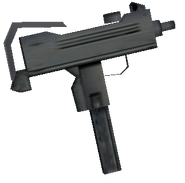 The Tec-9 is based on the weapon of the same name. It is a blowback-operated semi-automatic handgun, chambered in 9×19mm Parabellum that was designed by Intratec, an American offshoot of Interdynamic AB. 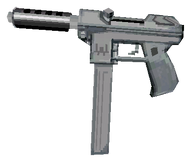 The Scorpion is based on the weapon of the similar name. It was developed in the late 1950s. Its accuracy is very good when compared to, per example, a MAC-10. The fire rate is also top notch. This weapon appears in Grand Theft Auto: Vice City Stories and Grand Theft Auto Online after installing the Bikers update.

The Assault SMG is based on a different submachine gun in each of its appearences:

The Combat PDW is mainly based on the Sig Sauer MPX, but with some elements of a Knight's Armament Company PDW (general receiver shape) and the Heckler & Koch MP5 (retractable stock and bolt assembly). It is a suppressed SMG manufactured by Coil and carries a 30-round magazine (which can be extended to carry either 60 or 100 rounds).

Retrieved from "https://gta.fandom.com/wiki/Submachine_Guns?oldid=1172955"
Community content is available under CC-BY-SA unless otherwise noted.