If the player is successful in performing a given jump, the game will report "Stunt jump completed" then "XX Stunt Jumps remaining" or "Stunt jump completed again"; if unsuccessful, the game will report "Not good enough" or "Stunt Jump Failed". Some jumps require the player to travel a certain distance to be considered successful, while others require the player to simply land the jump. Note that during Mission Replays, stunt jumps are not recorded despite the completion graphic appearing. They have to be performed in Story Mode to count towards 100% Completion and the Achievement.

Jumps are greatly aided by use of motorcycles due to their speed, size and ease of control. Some jumps are almost impossible without motorcycles. Franklin Clinton's special driving ability is also beneficial for these jumps. Regardless of vehicle or character, vehicles can be controlled in the air by rotating the anolog stick. 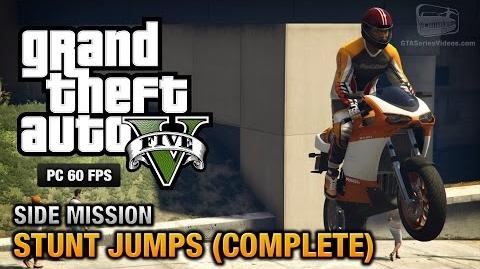 Retrieved from "https://gta.fandom.com/wiki/Stunt_Jumps_in_GTA_V?oldid=1293439"
Community content is available under CC-BY-SA unless otherwise noted.