"The Los Santos coastline is about so much more than golden sand, contaminated water and steroid abuse. It's also a perfect backdrop for laps of a winding stunt race where any mistake will send you and your million dollar supercar to the bottom of the sea. Hey, it beats the Ferris wheel."
―Description.

The race begins just south of the Vespucci Canals along Bay City Avenue where it heads west. Shortly after the start line, a large 180 degree raised bend turns the track right, with track pieces laid above the water in the Canals. It passes under the several walkway bridges, and players must avoid several blockades before it passes under Palomino Avenue. After passing under, a large incline leads to a jump, before players land in front of a cross-roads loop. Once completed the 270 degree corner loop, the track heads south towards the Vespucci Beach. Several bends lead the track towards the sea where the raised track corners multiple times, before two pieces of track run side-by-side along the beach. The track then lifts and corners 180 degrees to lead the players onto the other side of the track, now heading up the beach west. The track has a long straight before making a sudden left corner near the pier, and another left corner leading to a large 4-way jump. At this jump, players have the risk of crashing into each other if one is so dawdle behind. After making the first jump, the track circuits round to the other side of the jump, shortly before entering yellowing tubing. After exiting the tubing, a fast-pace ramp leads to ground level, reaching back to the start line.

The race is a 41 checkpoint long Lap race, default to 2 laps. It is set to Super cars only and is mid-day by default. The color scheme of the race is yellow and green throughout the course. 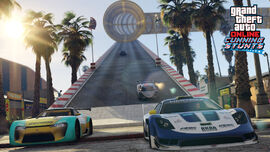 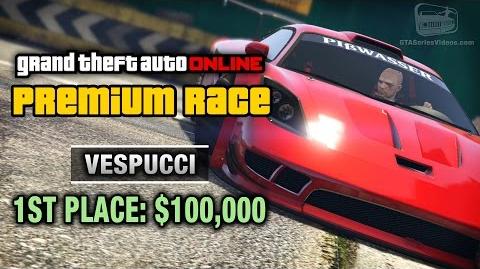 Retrieved from "https://gta.fandom.com/wiki/Stunt_-_Vespucci?oldid=1275726"
Community content is available under CC-BY-SA unless otherwise noted.