"There's a fine line between an epic descent and falling uncontrollably out of the sky, and which side you're on is going to depend on talent, judgement and just how hard the other guy is trying to kill you. Classic point to point stunt race for super cars."
―Race Description.

Plummet is a Stunt Race featured in Grand Theft Auto Online as part of the Cunning Stunts update. The race is exclusive to super cars, and up to 16 players can participate.

The race starts several thousand feet above Fort Zancudo. The track turns and is followed by a steep straight passing over the Zancudo Bridge, that ends in the tunnel under Fort Zancudo. Once out of the other side, the track goes back into the air. The course continues straight on, with several jumps before a series of turns. After the turns, the track splits and goes at angle. Once the track becomes one again, there is a straight to the finish line, which ends on a large target. The reward varies on the amount of players and finishing positions. The race is a 42 checkpoint long Point-to-Point race. Between checkpoints 37 and 39, players can diverge between two tracks. 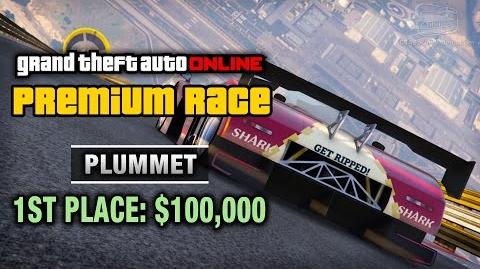 Retrieved from "https://gta.fandom.com/wiki/Stunt_-_Plummet?oldid=1275713"
Community content is available under CC-BY-SA unless otherwise noted.