"At some point, every wannabe rally driver in Los Santos has found themselves burning to death in a very expensive supercar halfway down Mount Chiliad. Well break out your flame-retardant suit, because this time you're going to need track precision, off-road reflexes and the ability to fly a superbike like it's an attack chopper. Point to point stunt race for motorcycles."
―Race description.

Mountain Drop is a Stunt Race featured in Grand Theft Auto Online as part of the continuation of the Import/Export update, released on February 28, 2017, during the 2017 Stunt Race Week event. It is available for up to 16 players.

The race is a 43 checkpoint long Point-to-Point race. Between checkpoints 1 and 3, players can take one of two different routes. 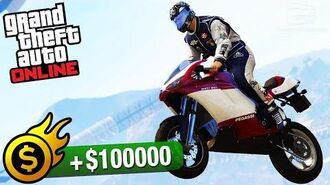 Retrieved from "https://gta.fandom.com/wiki/Stunt_-_Mountain_Drop?oldid=1157624"
Community content is available under CC-BY-SA unless otherwise noted.