"Somewhere thousands of feet above the Pacific Ocean, up there with migrating birds and the government-financed chemtrails, there's a nutjob falling out of the sky in a million-dollar supercar. But there's a smile on his face, because he's winning. That nutjob could be you. Believe. Lapped race for supercars."
―Race description.

Gauntlet is a Stunt Race featured in Grand Theft Auto Online as part of the continuation of the Import/Export update, released on February 28, 2017, during the 2017 Stunt Race Week event. It is available for up to 16 players.

The race is a 20 checkpoint long Lap race, default to 2 laps. 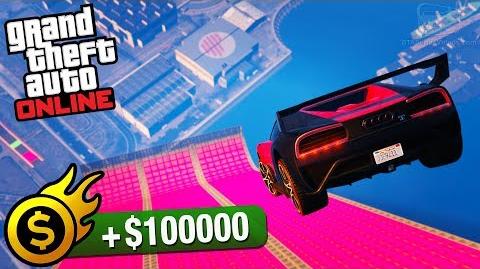 Retrieved from "https://gta.fandom.com/wiki/Stunt_-_Gauntlet?oldid=1275703"
Community content is available under CC-BY-SA unless otherwise noted.