"There was a time when jumping through a wreath of flame on a poorly engineered chopper was enough to give even the most jaded patriot a semi. Those simple days are gone, but apply the same formula a thousand feet above an urban area in the middle of the night and you stand a decent chance of a sudden rush of blood to the crotch. Spectacular stunt race for bikes."
―Race description.

Afterburner is a Stunt Race featured in Grand Theft Auto Online as part of Cunning Stunts, released on July 19, 2016, during the Cunning Stunts Bonuses I event. It is available for up to 16 players.

Afterburner is based entirely above the heart of Los Santos, featuring a circuit track with multiple jumps, steep corners and tubes. The race is intended for Motorcycles and features numerous rings of fire players must jump through during the race.

Shortly after the starting line, a two-way split track occurs, letting the player choose left or right - both directions have identical lengths and directions of track, the split simply divides competitors. When the two tracks meet again, a large jump is found, sending players flying into mid-air, leading the bikes through two hoops of fire in the process. Landing back on the track, a huge downhill slope leads racers to a 180 degree embankment, which also features a downhill slope, and yet another jump. A quick hop through a stunt tube, and racers find themselves tackling the timing of a rotating half gate within a stunt tube. Several more corners lead to another jump, which leads into a large series of tubes spiraling up high into the air. A much steeper section of tubes, with multiple speed boosters, springs players out, on the largest of falls, back onto the track. The stunt course then weaves back to the start line. The race is a 24 checkpoint long Lap race, default of 2 Laps. The time is fixed to midnight (00:00). 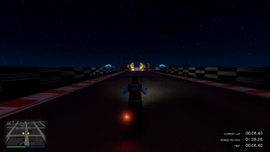 The two-way split track, up ahead. 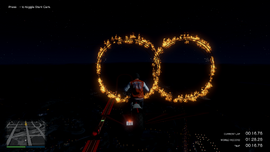 Two hoops of fire after a jump. 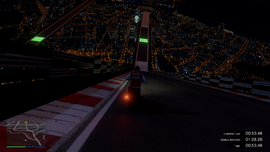 A large downhill slope, with Los Santos beneath. 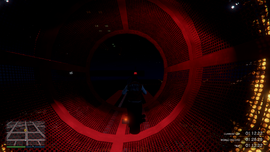 Jumping through a short tube. 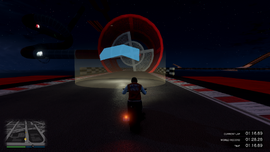 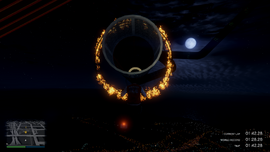 Another hoop of fire, leading into the tubes. 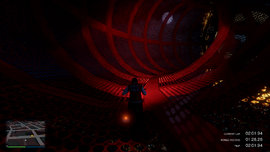 Inside the series of tubes. 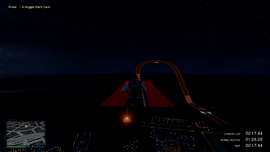 Jumping out of the tubes, back onto the track. 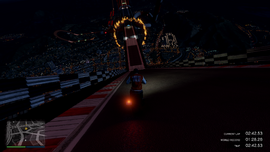 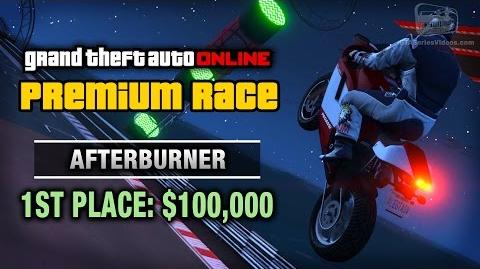 Retrieved from "https://gta.fandom.com/wiki/Stunt_-_Afterburner?oldid=1275691"
Community content is available under CC-BY-SA unless otherwise noted.