"It's a simple formula, but it works. Keep going till you see the tops of the clouds, then turn left and head downhill for a few miles until the G-force starts to detach your skin from your bones. If you're still alive and conscious after that, well, you're pretty much on your own. Good luck. Lap race for motorcycles."
―Race description.

45° is a Stunt Race featured in Grand Theft Auto Online as part of the continuation of the Import/Export update, released on February 28, 2017, during the 2017 Stunt Race Week event. It is available for up to 16 players.

The race is a 37 checkpoint long Lap race that begins in the sky. The course begins with a long straight that leads to a tilted section of track. This section of track leads to a left and a short straight, followed by another left. From here, the course is now leading down to the ground until reaching the tunnel, followed by a short section that goes slightly right. At the end of the tunnel, the course goes up and leads to a jump. 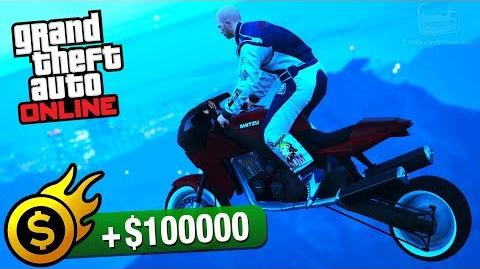 Retrieved from "https://gta.fandom.com/wiki/Stunt_-_45°?oldid=1275690"
Community content is available under CC-BY-SA unless otherwise noted.