Standard White - 100%
Not to be confused with the Streiter, an off-road station wagon in Grand Theft Auto Online.
“A swift trike, the Stryder proves once and for all that three wheels aren’t just for prospects.”
— Career Builder description.
“Nagasaki once again proves that four wheels aren't necessary with their all new Stryder... but neither are two. Just give the engine a few powerful revs and you'll soon convince yourself there's no shame in adults riding trikes. No shame. Really. There's nothing weird about it. Not at all. Nada. Stop overthinking and buy it now.”
— Legendary Motorsport description.

The Nagasaki Stryder is a trike motorcycle featured in Grand Theft Auto Online as part of the continuation of the The Diamond Casino Heist update, released on March 5, 2020, during the Stryder Week event.

The Stryder was initially featured as a mission-only vehicle in the "Getaway Vehicles" preparation and later used as a possible getaway vehicle in the Casino Heist. However, as of the Stryder Week event, it is available for purchase.

The Stryder appears to resemble the Lazareth Triazuma, although the proportions are closer to a Honda NeoWing, evident by the smaller front end, stylized headlamps and higher ground clearance.

The vehicle is distinguished by its three-wheeled layout and small bodywork, where the frontal area is predominated by a black guard mounted in front of the chassis. The front wheels are supported by various silver control arms, with the corresponding steering arms and the single suspension spring on the center. The front fairing is relatively small and features two large headlights on the lower front area, while two long intakes can be seen beside the fairing and holding two extensions above the front wheels, housing narrow turn signals on the edges. The handlebars are connected by dual supports on the center and have long frames that hold the rear-view mirrors, as well as a single "Race" digital display on the center similar to the Diabolus (which is much smaller than any other motorcycle and is hard to get a better view of them when in first-person mode).

The main body of the vehicle is rather unique, featuring a fuel tank with the aforementioned long intakes on the upper area, carbon-fiber strips on the middle area and plastic sections with rear exit vents on the lower area. The engine bay is partially covered by the side body extensions, which also have plastic trim around the front and carbon-fiber strips on the outer sides and the rear portion. Both the engine bay and the body extensions have meshed intakes on the front, and the bottom area has a triangle-shaped vent with plastic surrounding and supports on the sides for the body extensions.

The rear section mainly consist of the black seat, the tail lights and the license plate on the end, along with dual exhaust pipes below. The lower area is predominated by the foot pegs and the black dual-sided swingarm, with the fully-animated chain drive and sprocket on the left and a carbon-fiber circular plate on the right. A small mudguard can be seen below the exhaust pipes.

The bodywork, body extensions and rear mudguard are painted with the primary colour, while the details of the front guard, part of the front fairing, the detail of the front suspension shock, the sides of the fuel tank and the rear end are painted with the secondary colour. The vehicle uses a unique set of six-spoke dual rims, which can also support a dedicated colour (although only examples from the Content Creator or appearing in the Casino Heist prep and finale may have a black colour).

The Stryder is quick and agile in terms of both speed and maneuverability, being quite precise around corners at relatively high speeds. Unlike the Chimera, the Stryder's weight prevents it from ever pulling off wheelies and it does not fare very well on curbs, which can either throw the bike into a spin or cause the biker to fall off from the bike. In addition, it does not handle jumps very well and if airborne, it will pitch uncontrollably, often landing badly. It also struggles to reverse, even through small slopes.

The engine sound is high revving, being the same as sports bikes like the Akuma and the Defiler. 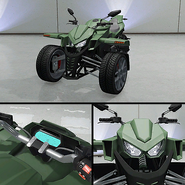 The Stryder on Legendary Motorsport.

The Stryder in the cinematic preview on Rockstar Games Social Club. 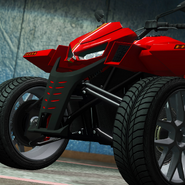 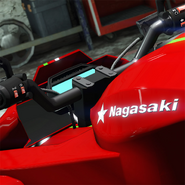 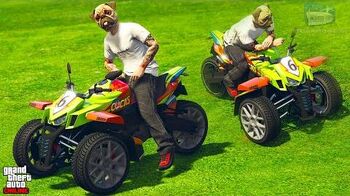