Stronzo is an Italian alcoholic beverage in the HD Universe.

In Grand Theft Auto IV, the brand appears in bars such as Lucky Winkles and Steinway Beer Garden. In Grand Theft Auto V, Stronzo bottles can be seen for sale in 24/7, Limited Service and Rob's Liquor convenience stores. A Stronzo sticker can also be seen on the Broken Bottle in the enhanced version.

It is likely a parody of Italian beers Peroni (labeling) and its subsidiary Nastro Azzurro (the blue stripe at bottom). The words "Foschia Rossa" ("Red Mist" in English) may suggest that is a red beer. 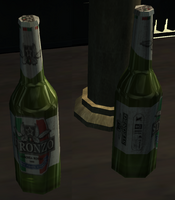 The heist crew in Three Leaf Clover during the first cutscene drinking Stronzo around a table in GTA IV.

Stronzo livery for the Bati Custom.

Stronzo livery for the Tropos Rallye.

Stronzo Rally livery for the Retinue.

Stronzo Livery for the Michelli GT.

Stronzo Livery for the Toros.

A Nightmare Impaler with a Stronzo livery.

A Novak with a Stronzo livery.
Add a photo to this gallery

Retrieved from "https://gta.fandom.com/wiki/Stronzo?oldid=1206728"
Community content is available under CC-BY-SA unless otherwise noted.