Prior to the release of Grand Theft Auto V, however, they function more like bikini bars as their dancers do not actually strip, until the release of GTA V, where they do strip.

Strip clubs appeared in the original Grand Theft Auto, and were even mentioned during certain missions but, like most establishments in the 2D universe, can not be accessed.

The game features a strip club known as Luigi's Sex Club 7, owned by Luigi Goterelli, but it can not be accessed.

The only strip club in GTA Vice City is The Pole Position Club, which, following "Shakedown", may be purchased by the player. In addition to open stages (which are primarily populated by conventional pedestrian models), the Pole Position offers backroom dances by a stripper, which the player may pay by the minute ($5 every 5 game minutes) to watch. By spending a total of $300 on the dances, the player will complete the club's asset mission, allowing the player to acquire money from the club from this point on, and it will drop $4000 each day. The stockier backroom stripper is also replaced by a slimmer and more scantly-clad counterpart.

In addition, once the club's asset mission is completed, another backroom of the club is opened. Upon entering this room, a cutscene is activated showing a more animated stripper dressed in a cowgirl theme dancing for Tommy. Before this room is unlocked, the room is closed, with a sign reading "No Entry - Management Only" posted on the door. The stripper in this room is rumored to be one of the twins mentioned in the game's manual. The other is a bartender in Malibu Club after that asset is bought.

GTA San Andreas offers the player an expanded number of strip clubs dotted around San Andreas: four in total, not including Jizzy's Pleasure Domes, which is only accessible in game during a mission. The accessible strip clubs include:

(Several other strip clubs are in evidence, but cannot be entered.) 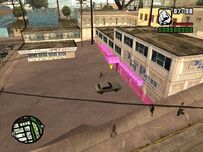 Each strip club comes with one of two different interiors depending on their location and size; The Pig Pen and the Old Venturas Strip Strip Club, both larger inner city strip clubs, feature a spacious variation, while smaller strip clubs, including The Big Spread Ranch and Nude Strippers Daily, use a more compact interior.

In all strip clubs in the game, the player may receive a private dance in a backroom for $100 (only one dancing animation is featured), or throw $20 worth of money at dancing strippers in public area, prompting them to execute increasingly erotic dance moves. In addition, the clubs are typically protected by security; any unruly behavior by the player (such as jumping onto a stripper's stage, attacking any individuals or simply firing a gun) will prompt security guards to react aggressively against the player, resulting in the player being unable to use any of the club's facilities as long as the player is inside. It should also be noted that guards constantly respawn, so the player will not be able to clear the clubs.

The private dances go into 3 levels of dance sessions. Each one has a different dancer with different moves:

Also, the music collection only consists of 3 songs that play in the main areas and private rooms of all strip clubs. 2 of the songs are from CSR 103.9 and the other is from Bounce FM. The songs are:

A non-interactive version of a strip club is available as one of the Empire Building business options in GTA Vice City Stories. Upgrading a Protection racket site to high roller status transform the building into a strip club, where a dancer can be seen performing inside. The dancer cannot be interacted with, and will continue to dance even when the player jumps on stage to her.

There are strip clubs in GTA IV, but only The Triangle Club in Bohan and the Honkers Gentlemen's Club in Alderney are accessible to the players. The others are the Pillows Club, in Cerveza Heights (under the subway station), and the unnamed "Girls, Girls, Girls!" on Wenrohronon Avenue in Beechwood City.

Music selection differs in the GTA IV strip clubs this time. In The Triangle Club, The Vibe 98.8 playlist will play in the main area (albeit without commercials) while Honkers plays the Electro-Choc playlist but in Episodes From Liberty City (disc version) Electro-Choc will play in both clubs. In the case of private dances however, there are three songs for each dance session. This applies in both strip clubs.

Strippers in the strip clubs will sometimes wear garters (bands of elastic cloth; usually worn around the thigh by exotic dancers and strippers). If one looks closely at the dollar bills stuffed into the garter, they are seen to be 69 dollar bills, another innuendo by Rockstar to the 69 sex position. Strip clubs in GTA IV may also be used as a place for players to bring their friends (or even girlfriend, depending on their taste) to during outings, but requires the player "enjoy themselves" by paying for at least one private dance. Like in GTA San Andreas, security guards are present in strip clubs, watching for disruptive behavior and preparing to react to troublemakers a hostile manner; a strip club's operations will also cease if the player chooses to run amok in the vicinity. Similarly if the player lacks money and asks for lapdances regardless, the dance session will continue but end with the dancer(s) running out of the room screaming, followed by security attacking the player and the player gaining a wanted level. If Niko has a friend such as Roman at the strip club, he will help fight the Security Guards.

In order to enter a strip club, the player must be disarmed. There is a glitch in the PS3 version in which if Niko goes into the Triangle Club alone and partakes in a private dance, the dancer may run away after the dance and security guards will attack, regardless of whether the player has drawn a weapon or not.

If the player goes to the strip clubs on Valentine's Day, some of the strippers will be wearing red and white heart-shaped pasties and will have hearts on the front of their thongs.

In the DLC The Lost and Damned, the Lost MC Clubhouse safehouse occasionally has a woman pole dancing on a stage, using similar dance moves than those scripted for stage dancers in the strip clubs. Johnny cannot interact with these dancers.

Strip Clubs in GTA V have been upgraded since GTA IV. There is only one player-accessible club in the game; it is located in Los Santos and known as the Vanilla Unicorn. It offers things such as new and improved lap dances (but without the previous feature of lap dance music), where the dancers are fully naked except from panties, the ability to throw money at the strippers, and the ability to actually be thrown out by the bodyguards. When having the private dance, the player can choose to flirt with the and/or touch the stripper while trying to make sure the guard can't see them. Doing either of these things raises the stripper's personal like bar. If it reaches the top, the player can choose to take them home, or receives the ability to get a double dance.

In Grand Theft Auto V, when Trevor takes over the Vanilla Unicorn, he receives free dances from all the girls at the club. The no touching rule no longer applies to any of the 3 characters after this point, so players can touch the girls as much as they like, even with the bouncer looking right at them. They may even walk on the stage without being thrown out.

Three other strip clubs (and general bars/nightclubs that apparently feature stripping entertainment) are present in Southern San Andreas but are not accessible to the player.

In GTA Online, the strip club is unlocked after reaching rank 6. The player will receive a text message, and the player can visit the club anytime they want. The player can get a private dance, and can raise the strippers' bar, by flirting with them, using a microphone if they have one. However, the strippers don't dance topless like in Grand Theft Auto V on PS3 & Xbox 360 versions. The enhanced editions were patched to add topless dancers in the 1.27 update. After the like bar is increased enough, their number will be added to the players' phone. Then, they can call the stripper to come to their house to give a private dance for free.