View source
watch 02:30
Dead Cells Final DLC - The Loop
Do you like this video?
Play Sound
For other uses, see Stretch.

Hassan Johnson
“Oh, no, no, show some respect here, ni**a. The man they couldn't hold down is back. Come on, now.”
— Stretch to Franklin Clinton in the mission The Long Stretch

Stretch was a senior member of the Chamberlain Gangsters Families and a former friend of Franklin Clinton and Lamar Davis.

Harold Joseph was born in Los Santos and joined the Chamberlain Gangsters Families at a young age. He eventually worked his way up through the ranks and became a senior and respected veteran "OG" member within the gang, also earning his nickname "Stretch". He also became friends with up-and-coming members Lamar Davis and Franklin Clinton. However, Franklin developed an antagonistic relationship with Stretch, presumably due to his reckless and selfish behavior. Lamar, however, idolized Stretch from a young age.

At some point prior to 2013, Stretch was arrested and taken to prison for an unknown crime that he presumably committed for the CGF.

Renatta Sidwell posts a message on his Lifeinvader after his release from prison critical that he hasn't been to visit her or "the little one", implying he is shirking his paternal responsibility.

Near the beginning of the events of Grand Theft Auto V, Stretch is released from prison for crimes which are never revealed, and Lamar plans a sort of reunion for himself, Stretch and Franklin. The trio first meet at the front of Franklin's house, where Franklin and Stretch both exchange insults/crude jokes and nearly get into a fight with each other; Lamar questions why they can't ever get along.

After passing by a gunshop, they go to a factory at La Puerta for a drug deal with Ballas gang member D. Upon arrival, a friendly conversation quickly goes awry when D becomes hostile with Franklin and Lamar, which further worsens when the crew realize the Ballas have arrived to kill them as revenge for D being kidnapped by Lamar and Franklin earlier. Stretch, in anger, shoots and kills D; after this, the trio then begin to escape the factory. They enter a shootout with the Ballas and kill them all, but upon getting out of the factory, the LSPD have arrived, leading to a car chase. However, the trio lose the cops, and drive back to Franklin's house.

Some time later, Stretch tells Lamar and Franklin to buy drugs from a gangster in Grove Street. However, Trevor unexpectedly comes to the deal as well, and thanks to him, it is revealed that the drugs are fake and that they were going to be scammed if it wasn't for Trevor interfering. Some Ballas members are also waiting to attack them after the failed deal. Franklin, Lamar and Trevor kill all the gangsters and manage to shake off the police yet again. If Franklin escapes with Lamar, he will tell Lamar on the way home that Stretch set them up.

Stretch eventually convinced Lamar to go off on his own to the Ballas hideout in Paleto Bay and tell the Ballas that they are willing to sell drugs, as this would be a sort of a money making and peace making opportunity. In reality, this was a trap and Lamar ended up getting kidnapped by the Ballas.

However, after being convinced by Tanisha, Franklin, with the help of his new criminal partners Trevor Philips, Michael De Santa, and Lester Crest, assault the sawmill, kill all the Ballas, and rescue Lamar. While on the way back home, the two have a small dispute during which Franklin attempts to convince Lamar to leave his gangbanging, crime-ridden lifestyle, and get a real job. Franklin also tells Lamar about how Stretch hooked up with the Ballas during his time in prison, and that Stretch was the one setting them up the entire time.

By the end of the game, Franklin is given separate orders by Steve Haines and Devin Weston to kill one of his friends. Haines wants him to kill Trevor and Weston wants him to kill Michael. The player then has to choose between carrying out Haines' instructions, carrying out Weston's, or disregarding them both and getting together with both Trevor and Michael to take out their enemies.

Michael De Santa: "Alright, I'm at the courts, I think I know which one Stretch is."
Stretch (talking with the Ballas): "Lamar Davis. Disrespectful ass motherfucker's trying to break the order of things. Please. Pair of bitches. Only pair of bitches the Stretch tolerate, are the ones that worked his pole last night."
Ballas: "Man, that's bullshit."
Stretch: "You want to see? I'll show you right here, n***a, watch."
Michael De Santa: "Hey! Lamar and Franklin send their best."
Stretch: "Hey, who this shakey white dude? Hey, where the fuck y'all goin?"
Ballas: "Hey, that's yo' problem, my n***a. My bad."
Stretch: "You one of them old dudes hangs with Franklin. Oh, okay, I get it."
—Stretch shortly before getting murdered by Michael De Santa.

Franklin contacts Lester and asks him for help on figuring out what to do. Lester initially suggests killing both Trevor and Michael, but eventually comes up with a better way to solve the problem. He lures Haines' corrupt FIB allies and Weston's private Merryweather batallion to a foundry where the three protagonists ambush and kill all of them, stripping both Haines and Weston of their brute force power. They give a call to Lester, who tells them the current locations of their targets. Michael will agree to assassinate Stretch, due to his lack of any association with him. Stretch will be hanging out with a Ballas crew, in the basketball court at the BJ Smith Recreational Center, talking about Franklin and Lamar. Michael interrupts the conversation, telling Stretch that he's got a message from his "homies"; Stretch figures out that Michael is a friend of Franklin and orders the Ballas to kill Michael, but ultimately Stretch and the Ballas are all killed. Immediately after completing his job, Michael calls the others, stating that Stretch "ain't a problem no more."
The events of this mission have been officially confirmed to be non-canon to the storyline, and the events featured do not relate to the series and therefore didn't happen.
For the canonical ending of Grand Theft Auto V, see The Third Way (Option C).
If Franklin chooses either A or B, he will receive a phone call from Lamar, who informs him that he has finally cut ties with Stretch, having agreed with Franklin's warning after thinking about what he'd said after rescuing him, Franklin wishes him the best and asks him out to hang out some time, Lamar agrees but not before hanging up, after telling Franklin that he is laying low for the time being (which is assumed that Stretch survived the game and will probably come looking for Lamar).

Aftermath of The Third Way

Los Santos Shepherd Newspaper "A notorious member of the Chamberlain Gangsters Families gang was killed yesterday, only months after he released on parole. Harold OG Stretch was shot while playing basketball. No witnesses have come forward. Mr. Joseph was unmarried."

From his appearances, Stretch is shown to be an extremely murderous, violent, brutal, bloodthirsty, sadistic, selfish, reckless, cold-blooded and trigger-happy gangster, who for some reason, shows a very strong mutual dislike towards fellow gangster Franklin Clinton and the two frequently argue, leaving Lamar to pick a side, however most of the times Lamar tries to stay neutral to their conflict and tries to resolve their issues.

The possible reason for Franklin's dislike of Stretch could be due to Stretch trying to pull Franklin into the life that put him in jail in the first place, and also due to Stretch's selfish personality and his routine gangbanging life, while Stretch appears to dislike Franklin due to his attempts to leave the hood and make something real for himself as well as for skepticisms and his doubts about the deals they make and that Lamar and Stretch should also leave the hood and get some jobs which won't get them killed in the process.

He appears to have a very short temper, assaulting Franklin for poking fun at him for "dropping the soap" in prison, and is also very merciless as shown when he immediately, and without hesitation, shoots an unarmed D twice in the face when he discovered that he had betrayed them.

In spite of his recklessness, Stretch is also very deceitful and manipulative, as shown when he secretly defected from the Families to the Ballas in prison, feigned loyalty to the Families while he was actually a traitor (unbeknownst to most) and several times used his influence on Lamar to manipulate him and try to make him think that Franklin is a snitch and to make deals with the Ballas which are actually set-ups for Franklin and Lamar to be killed. After the shootout at the scrapyard in The Long Stretch, he pins the blame on Franklin and Lamar for killing D and the Ballas, even though he too participated in the shootout and was the one who shot D to start with.

Stretch is a short, bulky man with numerous tattoos covering his body. He wears usual CGF clothes including a white T-shirt, blue shorts, a green hat and a silver chain. He has no hair at all.

Stretch without his hat. 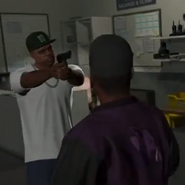 Stretch about to kill D.