"Who doesn't want their own limousine? Possibly the least practical car for navigating a gridlocked urban metropolis but, slap a stripper pole and a margarita machine in the back, and you won't care if your driver takes 3 hours to find a parking space."
―Southern San Andreas Super Autos description.

The Stretch is a stretch limousine featured in various GTA games. It is manufactured by Dundreary in GTA IV and Albany in GTA V. However, the name Dundreary Stretch is still present on the GTA V rendition.

The Stretch's design varies in each game, being modeled after the most common American limousines of their respective depicted periods.

"VIPs, mob bosses, major criminals and prom parties love to be seen in one of these."
―GTA Vice City Website.

In Grand Theft Auto: Vice City and Grand Theft Auto: Vice City Stories, The Stretch is based on the 1981-1989 generation Lincoln Town Car, with additional styling cues from the Cadillac Fleetwood and Mercedes-Benz S-Class W116. In the beta version, the exhaust pipes on the Stretch were normal and textured, but in the retail version they are transparent, almost glass-like.

In Grand Theft Auto: San Andreas, it resembles the second generation Lincoln Town Car, albeit with headlights, front grille and tail-lights of a Cadillac Fleetwood and DeVille respectively.

The inspiration for Grand Theft Auto Advance Stretch is uncertain due to the lack of detail, but resembles is based on 1981-1989 generation Lincoln Town Car. For some reason, the Stretch in GTA Advance has a truck horn.

In GTA Vice City, it is only available in white, with the exception of a gold variant used by Candy Suxxx during the mission Martha's Mug Shot, and a black variant used by Avery Carrington during cut-scenes for his missions which is only obtainable on the PC version by glitching the replay mechanic.

In GTA San Andreas, it is available only in white, but can be modified and painted any color in a Transfender workshop; note, however, that only the upper portion of the Stretch can be given a custom color (one Stretch can be found during the mission "Jizzy" that is black on the lower portion, although obtaining this Stretch is extremely difficult).

In GTA Vice City Stories, the stretch is available in white, gray, dark gray, and red colors. A bulletproof black Stretch is obtained during Kill Phil and is retained afterwards, so it can be parked in a garage and saved after completing the mission. A bulletproof variant can be purchased in Sunshine Autos for $3,000.

In the 3D Universe, the Stretch is considered the most luxurious and expensive 4-door sedan in all games which it appears, even surpassing the faster Sentinel and Washington.

In Grand Theft Auto IV it is essentially the limousine variant of the Dundreary Admiral, which is based on the Mercury Grand Marquis. It now features 5 pillars, with decorative lights on each center pillar, and holds a luxury interior. On the rear, a sports aerial can be seen mounted on the trunk of the vehicle. It bears a TV inside, depicting images of the beta version of the Sultan RS and a vague image of a boat at sea, possibly that of the Dinghy. Because of the use of bloom effects, the latter will appear too bright for one to identify, unless they view it through the Stretch's tinted windscreens, or through inspection of internal files.

GTA IV's Stretch also features durable windows (particularly side windows) unlike most other cars in the game - they can withstand a significant amount of gunfire before shattering. The Stretch comes in numerous tones of white of black. The vehicle will make an audible door ajar sound if a door is open. It can be heard clearly in quiet areas with the volume turned up.

The Stretch is equipped with a GPS system with a female voice, but only if the player leaves the "selected cars" (default) option in the audio menu.

As newer luxury/executive cars were introduced in the HD Universe, the Stretch is no longer considered the most luxurious and expensive 4-door sedan.

In Grand Theft Auto V, it is the limo variant of the Albany Washington, which is based on the Lincoln Town Car. The Stretch sometimes spawns in a two-tone color, where the secondary color will be located in the lower border of the car. The car appears with an unknown dark window tint applied by default.[1]

The rear interior of the vehicle retains the design of the original interior in GTA IV and isn't changed in the enhanced version of GTA V. The television screen from GTA IV is removed.

Being a large, multi-passenger vehicle with an extended drive axle due to its length, it has a rear wheel drive layout. Exceptions are the GTA III and GTA Vice City variants which are front wheel drive, therefore, not requiring an extended drive axle and performing better in terms of acceleration and hill climbing. Its length makes it difficult to maneuver through tight spaces and around corners at high speed, and its suspension is too soft, contributing to body roll. Although it may be prone to body roll, the soft suspension also guarantees a very comfortable ride on potholed roads. Its ability to absorb damage is not particularly impressive either, making the Stretch more of a specific-use vehicle, or a status-grabber, and a generally poor choice for primary transportation, or for evading cops. Unfortunately, it can only fit three passengers, and thus cannot be used to transport extra gang members in, like the Coach or Bus can.

The Stretch's performance is a somewhat downgrade from the 3D Universe rendition. Due to it being based on the Admiral, an already heavy vehicle, it is a very heavy limousine and therefore its acceleration is inferior. Its long wheelbase also proves it hard to corner, slowing down for corners is vital. The durability is an improvement thanks to its bulky design and reinforced windows. The low-profile body design also makes it less of a target to enemies.

Like the Admiral, the Stretch is powered by what appears to ve a V8, as suggested by the engine cover, coupled to a 5-speed gearbox in a front engine, rear wheel drive layout. Its sound is similar to that of the Admiral, as well as many luxury sedans.

The Stretch's performance seems unchanged from the GTA IV version, except that the vehicle has somewhat better handling, due to the reduced mass. Its top speed is reduced slightly, and acceleration is reduced significantly, even despite the retained drive system and less mass. Gear shifts are slightly higher, thus giving the car less potential in terms of acceleration.

An earlier iteration of the Stretch in GTA III prior to the game's release.
Add a photo to this gallery

Interior of the passenger compartment in GTA IV{{'}}s Stretch. 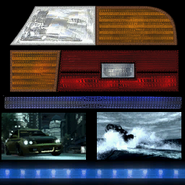 TV screens and lights.
Add a photo to this gallery

The Stretch on the Rockstar Games Social Club.

A Washington next to a Stretch in GTA V.

Interior of the passenger compartment in GTA V{{'}}s Stretch.
Add a photo to this gallery

A black Stretch similar to that ridden by Avery Carrington. (Rear quarter view)

A gold Stretch in GTA Vice City, obtained from "Martha's Mug Shot".
Add a photo to this gallery

A white-black Stretch in GTA San Andreas. (Rear quarter view)
Add a photo to this gallery

In the enhanced version of Grand Theft Auto V, it is possible to find a Stretch with a unique pink color. This particular model can only be seen parked in a single location and is not found in traffic.

The pink Stretch outside Cockatoos.
Add a photo to this gallery

The Stretch is only used in a few missions, and is usually found in the more affluent areas in each city.

The Stretch does not spawn on the streets, but instead


Cite error: <ref> tags exist, but no <references/> tag was found
Retrieved from "https://gta.fandom.com/wiki/Stretch?oldid=1133151"
Community content is available under CC-BY-SA unless otherwise noted.