Standard White - 100%
Not to be confused with the Stryder, a sports trike in Grand Theft Auto Online.
“Look in the mirror and what do you see? Is it a flabby, pallid investment manager with a solitary sex life and spiraling personal debts? It's OK, you don't need to answer that - you're only seeing this ad because we've datamined your Lifeinvader profile. And statistically, we know your next step is going to be the impulsive purchase of a 4x4 that you'll never take out of the city - which is where the Streiter comes in.”
— Southern San Andreas Super Autos description.

The Benefactor Streiter is an all terrain station wagon featured in Grand Theft Auto Online as part of the The Doomsday Heist update, released on December 23rd, 2017, during the Festive Surprise 2017 event.

The Streiter takes elements from the Mercedes-Benz E-Class All Terrain 4x4², with headlights reminiscent of a Mercedes-Benz CL-Class C216.

The Streiter is depicted as an off-road station wagon with a similar profile to the XLS and a similar front end to the second generation Schafter and its variants. On the lower area of the front, the car has a trapezium-shaped meshed intake with a license plate on the centre, along with smaller intakes on the outer sides with a black horizontal separation and a circular fog lamp on the upper outer corners. On the upper area, the car bears a chrome grille with three horizontal elements and the Benefactor emblem on the centre, while the outer edges house a set of circular headlamps over black sections, L-shaped strips on the lower inner sides and small turn signals on the outer sides, with chrome separations on the units. The bonnet is relatively simple and has elevated portions running from either side of the grille to the base of the cabin A-pillars.

On the sides, the car has black fender arches extending further from the body, as well as chrome strips at the bottom of the side skirts. There is a body line starting from the outer edges of the headlamps and run towards the outer edges of the tail lamps, passing above the chrome horizontal door handles. The greenhouse area features chrome trims around the side windows and black trim on the windscreen and inner pillars, along with square-shaped mirrors whose lower halves are finished in black. The roof area features two chrome rails separating the panel from the rest of the car.

The rear of the car is predominated by the compartment door, which features a roof spoiler above the rear window and two black sections beside it, while the area below the window is occupied by the Benefactor badge on the centre reused from the XLS and the license plate. The middle section houses the tail lamps, with the outer ones being the main/turning lamps and the inner ones the brake/reverse lamps. The lower area is occupied by the bumper, which houses two red reflectors on the rear quarters, a black bottom diffuser with four separations and two mouldings on the edges for the exhaust tubes. As expected from an off-road vehicle, the underside has sump guards on both ends protecting the axles, as well as red suspension springs for the wheels.

The interior of the car is shared with vehicles like the Schafter and the Tailgater, but there are protruding details around the dials and some of the warning lights are located within the same gauges. The steering wheel bears the Benefactor logo on the horn cap.

The primary colour of the vehicle is applied on the bodywork and the interior stitching, while the secondary one is applied on the lower portions of the front, the portion of the skirts behind the chrome strips and the roof panel. Its stock rims appear to be a derivative of the "Benefactor" SUV rims seen in Los Santos Customs, but lacks the detail on the centre and has riveted details on the surrounding, wrapped in high-profile tyres.

Due to the off-road nature of the Streiter’s design, the performance is sub-par for its class, having increased weight and lowered top speed as a result. And although durable, it is not recommended for racing, as even off-road rally cars such as the Omnis and GB200 can easily out-perform the Streiter. Another downside from the vehicle is that it has lower ramming capabilities compared to off-road dedicated vehicles like the Kamacho or the Insurgent, limiting its purpose for cruising around uneven terrain. However, it generally has good stability and does not flip easily.

The Streiter is powered by a single-cam V8 engine, coupled to a 6-speed gearbox in a front engine, all wheel drive layout with equal torque distribution. The engine sound appears to be an edited variation of the one used in the XLS, the Stanier and the Police Cruiser, using additional effects derived from the Schafter V12, the Schafter LWB and the Nightshark when idle. Due to the loud effects, the base engine sound can be heard quite clearly on higher revolutions. 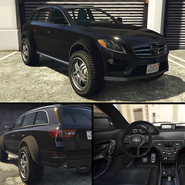 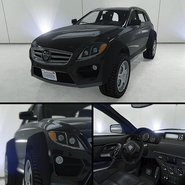 A promotional poster of the Streiter.

The Streiter on the updated Rockstar Games Social Club.

The Streiter in the cinematic preview on GTA Online Rockstar Games Social Club. 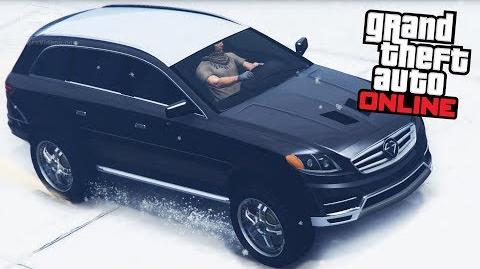