View source
watch 02:34
Fire Emblem Warriors: Three Hopes - The Loop
Do you like this video?
Play Sound
For other uses of the term Shark, see Shark

In Grand Theft Auto: Vice City, they can be found around the North Point Mall and Prawn Island, but are not a threat to any other gang in Vice City. They can also be seen driving their Gang Burrito (the vehicle of the second generation of the Gang). It is suggested that they are involved in arms smuggling and drug trafficking. They seem to be on bad terms with The Bikers. They even stole Mitch Baker's prized motorcycle and stored it in a garage in Downtown Vice City. The unnamed leader of the Gang betrays Ricardo Diaz and steals his shipment of drugs, causing Diaz to order Tommy Vercetti to kill him and many others in an airstrike. They are usually seen wearing denim jackets and jeans.

During the events of Grand Theft Auto: Vice City Stories, the gang was known as "The Sharks" and had many turfs around Vice City Mainland. They manage a number of drugs, smuggling, robbery and extortion businesses which Victor Vance can take over. The Sharks continue to attack Victor until all their businesses were taken. They often hunt Victor in their Gang Ranchers (the vehicle of the first generation of the Gang) and sometimes try to destroy his empire sites. They are seen wearing brightly coloured tracksuits, light brown or grey pants and berets. Their hats has a shark fin symbol on them. Their outfits resemble those worn by Dave Bickler in the "Eye of the Tiger" music video by Survivor.

The Sharks are at war with the Bikers and are constantly attacking each others Empire Buildings. This explains why the Streetwannabe's stole Mitch Baker's bike (which Tommy had to retrieve in 'Hog Tied'). It is implied the Streetwannabe's still hold hatred towards the Bikers. They are also arch-enemies of the Cholos since the beginning of the Grand Theft Auto: Vice City Stories. They will engage in violent confrontations if they meet each other on the streets.

The Sharks are also seen in Ocean Beach, Washington Beach, Prawn Island, Vice Point and even have influence in Viceport, but their influence has shrunk into a small street gang. The only territory they have left are Prawn Island and the Vice Point region.

The Sharks in Grand Theft Auto: Vice City Stories are hostile to Victor when he tries to take over their empire buildings. They will follow him anywhere he goes and will drive-by him from their Gang Rancher. They will also shoot him on sight if they see him on the streets. The Sharks will also shoot at members of the Vance Crime Family. During empire attacks, they wield incredibly powerful weapons, such as SMGs and Assault Rifles, which can kill the player in seconds, making the Sharks the most dangerous gang to deal with in Empire Building.

However, after Victor has took over all of their buildings, they will stop attacking him and they will be neutral to him. They won't attack the members of the Vance Crime Family either after this happens.

The Streetwannabe's leader only appearing in Phnom Penh '86. 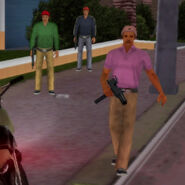