Niko "sweeping up" the thugs

Wasted
Busted
Dealers get away

Escuela of the Streets

Luck of the Irish

In-game time
“I need you to get some bitches taken out, moved on, whatever. Cause, yo I promised Mr. McReary I was gonna get this place cleaned up and I will.”
— Manny Escuela

Street Sweeper is a mission for Manny Escuela in Grand Theft Auto IV. The mission introduces drive-by shooting to the player.

During the cutscene, Manny will be seen recording one of his videos with police officer Francis McReary. Manny promises Francis that he will clean up the streets of South Bohan, so he sends Niko to hit some thugs in a garage in Windmill Street.

Niko heads over to the nearby car repair shop on Windmill Street. He then spots some gang members trying to escape in a car. Niko chases the car and ignores the gang members in the garage for now. He then kills the fleeing gang members. 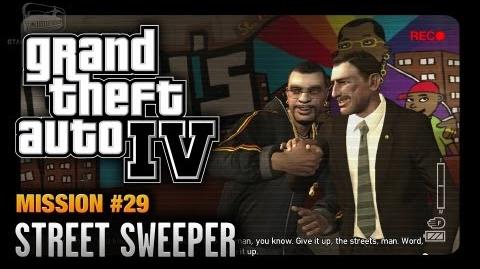