Standard White - 100%
“A flexible ATV that proves you can put the country kid in the clubhouse, but you can’t get ‘em off their trash-clogged, varmint-splattered Street Blazer.”
— Career Builder description.
“Sure, it's supposed to be a light and flexible ATV for use in agricultural work. But we've given it some cool wings and a stack of extra CCs, which heavily implies to a certain demographic that you'll survive taking it onto the freeway. That's not an assumption we'll ever publicly contradict. Good luck.”
— Southern San Andreas Super Autos description.

The Nagasaki Street Blazer is a modified quad bike featured in Grand Theft Auto Online as part of the Bikers update.

The Street Blazer is essentially a modified variant of the Blazer, where the front features a rearranged chassis with black lower framing and chrome bars holding the suspension shocks/springs, while the front of the bodywork is similar to the regular Blazer in shape, fenders and headlight. By default, the front lacks any guard, but can have one through mod shops.

The main body is more of less identical to the regular Blazer, but the upper front area has a carbon-fiber detail around the handlebars and fuel cap, while the engine bay features additional frames around the engine, a carbon-fiber detail around the front intercooler and the exhaust pipe on the left side of the engine block. The handlebars lack a central frame and has a black detail on the center, with a set of small gauges using "Sports Bike" dials, derived from bikes like the Akuma and the Bati 801.

The rear area is mostly the same as the regular Blazer, but has shortened rear fenders, a backrest, a small rack and long frames holding candle-like turning signals. The vehicle uses a longer swingarm to fit the larger wheels and incorporates an articulated dual frame, passing through the rear simgle suspension shock/spring. The exhaust pipe splits into dual pipes with large colored mufflers.

The Street Blazer is a very well-performing vehicle. Top speed is not very high but the acceleration is superb (both forward and backward), and the bike can stop from full speed almost instantly. Despite the slightly extended chassis, handling remains on par with the Blazer and the other variants. The vehicle performs well on the pavement, and is also still a very capable off-road ATV. If the Street Blazer is airborne, it may have trouble with pitching whilst airborne, as it has a bad tendency to shift and move around and if landed incorrectly, the rider may be at risk of being dismounted upon landing.

This version of the Blazer is also easier to perform wheelies, although once the wheelie is performed, the player will not be able to wheelie again, as the bike cannot wheelie once it has moderate speed. However on the plus side, the Street Blazer will not throw the player off if the wheelie is pulled back too far; the rear end rack acts like a pseudo-wheelie bar that prevents the player from falling off, so the rider can pull the bike back as far as they wish for as long as they want.

The Street Blazer appears to be powered by an upgraded parallel-twin engine, coupled to a 6-speed gearbox and powering all wheels with equal power distribution. It shares the same engine sound from the BF400 and the Manchez. 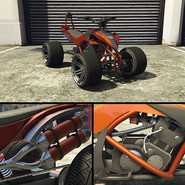 The Street Blazer on the updated Rockstar Games Social Club.