“Don't miss this opportunity to snap up a Classic Stratum station wagon at a bargain price. A short-lived Zirconium model that was plagued with bad reviews... Or as we like to call it, Limited Edition!”
— Southern San Andreas Super Autos description.

The Stratum's design is taken from the fifth generation (1994–1997) Honda Accord wagon, however D-pillars have been added. The car's real-life counterpart also fails to fit in the game's time setting of 1992. It could also be based on the Saturn SW, which sports a similar design and a fitting manufacturing year.

The Stratum assumes a more streamlined design compared to the Solair, and it is considered a tuner. The front of the car has a panel between the headlights in place of a regular grille, black details on the doors and around the windows, and small red tail lights on the rear quarters. The gas cap can be seen on the rear right side. The car spawns in a variety of single colors applied on the body.

The Zirconium Stratum 2.6GT carries over a very similar design in GTA IV, with its primary inspiration taken from the fifth generation Honda Accord station wagon or Saturn SW (with the same added pillars as the previous rendition), albeit with a front end derived from the S3-R31 and R32 Nissan Skyline, as seen in the hood, hood badge and grill (R31) and headlight design (R32). The rear end greatly resembles the first generation Subaru Impreza station wagon along with taillights and the Stratum lettering resembling a first generation Isuzu Impulse, although much longer and C-pillars which may be derived from the 1996-2001 Toyota Camry wagon. The Stratum also could loosely resemble a Ford EF Falcon Wagon.

The Stratum retains the overall design from the GTA San Andreas iteration, being more streamlined and sportier than the Solair and Ingot. The front of the car is largely similar, but there are small intakes added beside the number plate and two black strips with front-facing rectangular fog lamps, while the upper area has a small grille and the corresponding badges on the central panel. The sides are largely similar to its previous iteration, but "ZIRCONIUM" badges are added on the front portions, between the front arches and the front doors, while the roof features an aerial on the back section. The rear features additional tail lights and yellow reflectors on the rear compartment door, as well as additional badging above and "STRATUM" embossed between the tail lights. The rear bumper features black strips and the number plate on the center, while a single titanium-tipped exhaust pipe can be seen on the driver's side, just below the bumper.

The Stratum can be seen either in stock form or with a variety of extras installed on it, being the following:

The car is seen in a variety of single colours for the body, and it uses a set of seven-spoke rims with medium-profile tyres.

The Stratum is equipped with a GPS system with a male voice but only if the player leaves the "selected cars" (default) option in the audio menu.

In Grand Theft Auto V and Grand Theft Auto Online, the Stratum's design remains unchanged, although the Zirconium badges on both ends change from red to blue. The car also gains an updated interior in the enhanced version, being the "Feroci" interior and dial set also used on cars such as the Ingot and the Intruder. The extra components from the GTA IV iteration were also retained, although there is no option to install/remove these in Los Santos Customs and other mod shops.

Again, the car spawns in a variety of single colours on the body and retains the same wheel design, which is also shared with the Asterope.

Acceleration and speed are surprisingly good, considering the Stratum’s size. The drivetrain is front-engine, rear-drive, making the Stratum a good selection as a drive-by vehicle. The body is weak, however, making the car susceptible to intense damage from high-speed impacts and heavy gunfire.

The Stratum's handling is quite good, though oversteer can be dramatic at times, and its suspension evens out bumps without being excessively soft. Braking is acceptable, giving the car a good braking time which is helped by its low ride height and small weight. Crash deformation is very good, with the Stratum keeping most of its shape in a collision; engine build quality, however, is less desirable, with the Stratum often left disabled after only a few impacts. Acceleration is rather decent, and has a high top speed, overtaking some other sedans and cars of similar design.

The Stratum appears to be powered by an inline-4 with a single turbo fitted (contrary to the optional "Twin Turbo" badging seen in models with the spoiler extra), alongside the turbocharger's air filter seen at the bottom right. This engine is coupled to a 5-speed gearbox in a RWD configuration. The engine sound is smooth, comparable to that of the Solair and the Ingot, which are also station wagons.

In GTA V, the Stratum performs better due to the revamped handling in the game. It also gains more responsive handling, and braking is improved further, although this is still relatively poor compared to other cars in its class. The vehicle is noticeably slightly lighter, as it seems to glide around corners with little understeer. The steering itself, however, feels somewhat heavy and can serve as a handicap to an inexperienced driver.

Again the engine is the same turbocharged inline-4 with a 5-speed gearbox. However, it gains an all-wheel-drive layout (40%–60%, front to rear torque distribution), and retains the "Twin Turbo" badge seen in models with the spoiler extra, despite no changes being made to the engine. The engine sound is rather smooth, appearing to be similar to the one used in the modern Oracle.

The Stratum is considered a tuner, and can be upgraded at Wheel Arch Angels in Ocean Flats, San Fierro.

A Stratum with glass sunroof and luggage racks.

A Stratum with a solid sunroof panel and no luggage racks. 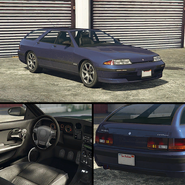 The Stratum on the updated Rockstar Games Social Club.

The Stratum is part of two vehiclemodelsets, "CARS_STATION_WAGON" and "CARS_TOURIST". The first set of cars is exclusive to the Stratum, Regina and Ingot. It isn't very common, but does appear in specific locations which guarantees a 1/3 chance of the Stratum spawning. The Tourist selection of cars is a collection of several low-medium end cars such as the BeeJay XL and Camper, which spawn in specific "tourist" locations.