Str8 From Tha Streetz is OG Loc's debut album, released in 1992, during the events of Grand Theft Auto: San Andreas. It includes the songs "Hard in the Yard", "4 to a Cell", "Iz U Packin?", "Loc is the Name", "Don't U Know I'm Loc, Oh Man?", and the demo track "It's Loc Baby", shown below. The album title is most likely a parody of Eazy-E's final album "Str8 off tha Streetz of Muthaphukkin Compton". As an easter egg, the album appears in various places in Grand Theft Auto IV and Grand Theft Auto V. 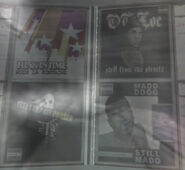 The album (top right) in a jukebox in a bar in GTA IV.
Add a photo to this gallery

400px
Retrieved from "https://gta.fandom.com/wiki/Str8_From_Tha_Streetz?oldid=1211278"
Community content is available under CC-BY-SA unless otherwise noted.