The Andromada arriving at Verdant Meadows.

• ­Toreno needs you to plant a bomb in the plane. Stealth is out of the question so you'll need to move fast.

• ­Use the bike to get up the plane's ramp and plant the bomb inside.

• ­Drive the bike up the plane's ramp before it takes off.

• ­You're trapped on the plane.

• ­The plane is packed with explosives! Be careful firing weapons onboard.

• ­You'll need a parachute to get off the plane. One of the crew members will have one.

• ­Pick up the parachute.

• ­You have the parachute.

• ­Place a satchel charge on the plane then get out the back.

Toreno: "Listen, Carl. We've got a problem. Some traitors from another department think they can help the "overseas situation" by financing militaristic dictators in exchange for arms contracts."
CJ: "Ain't that exactly what you do?"
Toreno: "Well, kind of, but we get to pick our dictators. Degenerates that we can control. We try to stay away from these guys with principles, cause that just muddies the waters."
— Mike Toreno tells Carl Johnson about the rival agents in Verdant Meadows

Stowaway is a mission in Grand Theft Auto: San Andreas, given to Carl Johnson by the government agent Mike Toreno from the Verdant Meadows Aircraft Graveyard.

Carl is in the middle of the airstrip waiting for Toreno, when government agents arrive in trucks and a cargo plane. Feeling exposed, he hides behind some crates. A little later, Toreno sneaks up to him, saying that the people who arrived are from a rival agency. Toreno, having permission from his apparent boss, wants Carl to kill the agents by bombing the cargo plane. Carl, though reluctant at first, accepts.

Carl is hopping on a bike, and is quickly making his way inside the plane (which is taking off), dodging bullets from the agents and the barrels falling from the plane. The plane eventually takes flight. Once on board, he makes his way to the front of the plane, killing several agents on the way. He places a satchel charge, and then, using a parachute he gets from an agent on board, he jumps out of the plane, freefalling down to earth as the aircraft disintegrates in mid-air, completing the mission.

The reward for this mission is $20,000. The mission Black Project is also unlocked.

Carl Johnson about to stowaway onto the plane.

The "dirty version" of the Defender Mark 1 Assault Rifle from Manhunt seen during the cutscene. 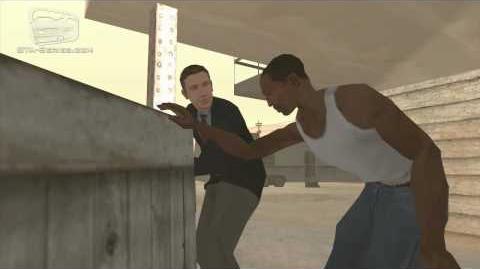 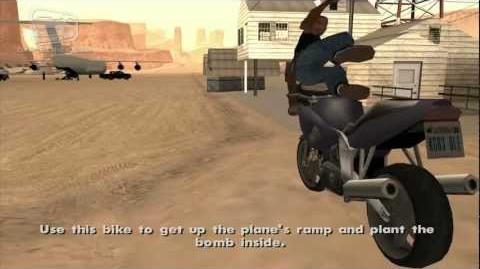 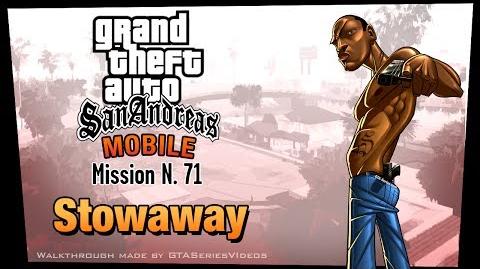 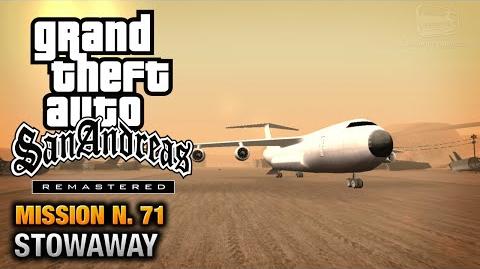