The Stone Hatchet on the Rockstar Games Social Club website.

No
“There's retro, there's vintage, and there's this. After 500 years of technological development and spiritual apocalypse, pre-Colombian chic is back.”
— In-game Description

The Stone Hatchet is a hidden unlockable weapon featured in Grand Theft Auto Online as a promotion for Red Dead Redemption II. It was added as part of the After Hours update, but only became available starting from August 3, 2018, when the event commenced.

The Hatchet appears to be a traditionally-made tomahawk, a stone axe head being attached to a wooden shaft with leather and feathers on the handle. This makes it the oldest-looking weapon in the game, although it may be a historical reproduction.

The damage, speed and reach of the Stone Hatchet is similar to that of comparable melee weapons, particularly to the Hatchet and the Battle Axe. Like other axes, it is also usable on bikes.

Its unique ability is triggering Stone Hatchet Rampage, a rampage mode akin to Trevor Philips' Special Ability after a kill. After killing a player or NPC, the player enters Stone Hatchet Rampage, making them nearly immortal for 12 seconds, which can be lengthened with further kills with the hatchet. It thus allows killing multiple enemies in melee or safely fleeing the area. Originally, the effect also worked when using the hatchet from a bike, making quick hit-and-run charges a more viable tactic. This was patched so it now kicks the player off the bike during Rampage mode. Additionally, switching weapons during Stone Hatchet Rampage immediately ends the ability, making it impossible to attack with other weapons with the ability active.

When Stone Hatchet Rampage ends, the player will have to wait for 30 seconds to reactivate it. During this period, the Hatchet acts as an average melee weapon.

Stone Hatchet Rampage may only be triggered in free mode, making the Stone Hatchet a mere alternate visual of other axes in other modes such as Survival. 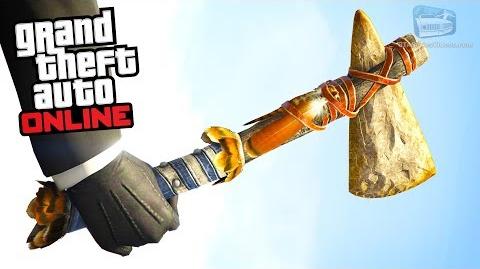