Cash and RP will vary depending on time spent completing the mission, the number of players involved, and whether players are in the same crew.

In-game time
“I need to find out who's been involved in some recent OTC stock transactions. Extremely covert, off-market stuff. Very lucrative, but no trail online. Merryweather (of course) have been contracted by the investors to secure the documentation and, if my sources are correct, it's being held at the port. If you could get me that info, I'd sleep a lot better tonight.”
— Description.

Stocks and Scares is a mission in Grand Theft Auto Online given to the player by Lester Crest. It is available for up to 4 players.

An over-the-counter stock transaction took place in a big warehouse at the port. Merryweather has been contracted to secure the documentation. The team needs to go to the location, eliminate all the Merryweather guards on the first floor, and then one player needs to hack the door access terminal, which gives access to the office containing the safe. One player needs to crack the safe while the other players protect him. After stealing the briefcase from the opened safe, the team needs to deliver the briefcase to Lester's warehouse in Murrieta Heights whilst being followed by Merryweather guards. 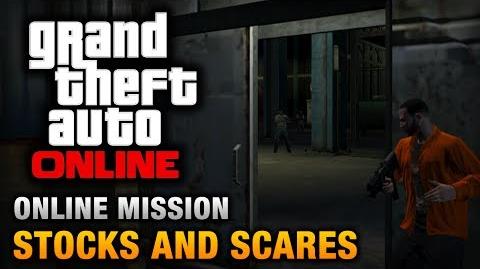