View source
watch 02:46
The Quarry - The Loop
Do you like this video?
Play Sound
Not to be confused with the Stinger GT, a similarly named classic vehicle in Grand Theft Auto Online.

Standard White - 100%
“This Stirling GT is a landmark of Germany's proud history of helping flabby, self-loathing businessmen pretend they're Grand Prix drivers... for two minutes between freeway traffic jams. It's a tradition that's been around for at least sixty years, so while it's still pathetic, at least it got there first.”
— Legendary Motorsport description.

The Stirling GT distinctively features a long front and a rounded design, featuring a chrome grille bearing two horizontal bars and a circular centre with the Benefactor emblem on it. Behind the glass casing on the edges, two circular headlamps can be seen, along with two smaller turn signals below. The bonnet features safety pins and intake ducts finished in black.

On the sides, the car features a detail starting from the front wheel arches and ending on the Gull-wing doors (one of the cars in the HD Universe to feature this door design), together with black slatted vents bearing the manufacturer emblem and dual exhaust pipes exiting directly in front of the doors on either side. The rear wheels have body plates covering the top quarter of the wheel, named body plating. On the greenhouse area, the car features chrome classic mirrors near the A-pillars and chrome window trim, while the rear features a "bubble" window, which distinctively sticks out from the rest of the body work. A fuel cap can be seen on the driver side, near the rear window.

The rear of the car is very curved, with a slightly curved license plate to fit in with the rest of the bodywork, just below the manufacturer emblem and between two boot pins. The edges have small rectangular tail lamps and the width of the car is fully protected by a chrome bumper.

The Stirling GT has excellent acceleration and its top speed is decent, falling in the middle between the Roosevelt and most of the other high end sports classics. The handling is incredible, acting less like a Sports Classic and more similarly to some sports cars, with large amounts of grip, meaning oversteer is only present when attempting to conserve too much speed around a corner. Along with the JB 700, Roosevelt, Casco, and Coquette Classic, the Stirling GT has high resistance to impact deformation. Its responsive handling, especially for Sports Classics, means it is a very good choice for racing in the Sports Classics class on most tracks, though the Z-Type is still a better choice on longer races with fewer corners.

The vehicle is stated to be powered by an apparent 3-Liter 310HP V8, which is replicated in the engine bay, as a single-overhead camshaft V8, with 4 double-barrel downdraft carburetors, and side exit, straight-through, twin-dual exhausts. The engine sound is shared with the Casco, and the JB 700 (latter applies to the enhanced version only).

The engine sound tends to crackle viciously when decelerating, this is because of its high-rev output, when decelerating, an excessive amount of unbalanced ratios of air and fuel are blown out of the exhaust, causing many consecutive explosions within the exhaust, this is because of its carburetors which don't automatically stop fuel input, and its straight-through exhaust system which doesn't quieten down these explosions. This can be heard prominently here. Because of this trait, turbochargers fitted to the car are emphasized much more and the dump valve is much more notable.

When the turbo and transmission are upgraded, the car will viciously shake when accelerated while stationary. This is much more prominent than other high-output cars. 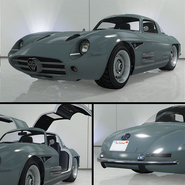 The Stirling GT on Legendary Motorsport in the enhanced version.

A Stirling GT with the "Rally Cage and Modifications" upgrade applied, which adds a racing fuel cell to the trunk. This also occurs on the Blade and Dukes.

The Stirling GT on the updated Rockstar Games Social Club.

3 heavily modified variants of the Stirling GT may appear in Vehicle Cargo source missions. Each variant has a unique license plate number, colour combination and different set of bodywork modifications.