For other uses, see Stinger (disambiguation).
“Don't mistake this for a standard Stinger. The GT is a hard-top, race-bred variant that boasts a top speed of 175mph and 0-60 in less than 6 seconds. With only 40 produced, the Stinger GT is one of the most collectible sportscars in the world. So savor those fleeting moments of enjoyment in between being terrified of crashing it or somebody stealing it.”
— Legendary Motorsport description.

The Grotti Stinger GT is a two-door coupe featured only in Grand Theft Auto Online.

The Stinger GT takes the grand-touring coupe styling from the Ferrari 250 GTO and its 330 GTO performance variant, seen in the vehicle's overall design, including the side profiling, greenhouse area and the short swept-back rear fascia including the duck-tail spoiler. The design of the Stinger GT also shares influence with the Shelby Daytona, while its front end is reminiscent of the Intermeccanica Italia and Alfa Romeo 33 Stradale. In the front fascia, there is resemblance to the Ferrari Dino, mainly the Dino 206 for the headlights and the grill/mouth. It draws other minor inspirations from the Alfa Romeo Giulia TZ2. The rear, glass-enclosed V8 with down-draft carbureters may be inspired by the Ford GT40, while the double barrel downdraft carburetors found on the engine block appear to be based on the Weber carburetor series (particularly the double-barrel downdrafts found on the Ferrari 250 GTO, on which the Stinger GT is based heavily).

As the name suggests, it is the grand tourer variant of the Stinger and thus, shares the initial bodywork design and layout. However, it is depicted as a hardtop, rear-engine variant of the aforementioned vehicle. The front of the car retains the split grille and the circular lamps located in chrome housings, but the front end is slightly more extended and the lower sides of the grille are a bit curved. The chrome bumper of the regular Stinger is removed in favour of a front splitter, which spans the width of the car. The bonnet features two vents, whose concave portions cover most of the section between the front axle and the windscreen.

The side profiling remains mostly identical to the regular Stinger, but the rear area was slightly altered with two intakes for the engine bay. The greenhouse area features a solid roof, rear-quarter windows and a single rear window that exposes the engine bay, along with chrome trims around them.

The rear end received drastic changes compared to the regular Stinger; a flat panel houses a set of protruding tail lamps and the plate lights are no longer present, although the corresponding badges remain in place. Said rear panel is surrounded by extensions on the sides and the upper area, forming a ducktail spoiler. Two bevelled twin-exhaust tips can be seen in the centre, which are of a larger diameter than the ones from the regular version. Its underside was rearranged as well, with the gearbox located on the rear axle and two black frames conforming the rear portion of the chassis, which allows the rear compartment to pivot backwards.

The interior of the car is the same one used in the Stinger, being a derivative of the Banshee interior, while also retaining the wooden/walnut panels. The Grotti badge can be seen on the steering wheel, but the one on the passenger-side portion is absent.

Again, the primary colour of the car is applied on the bodywork, while the secondary colour, although unable to be changed, is applied on the interior stitching, being only dictated by the selected colour when purchasing it (i.e. buying the car in a red colour gives an orange colour for the interior stitching). It uses the same set of wheels as the Stinger, being a derivative of the "Wired" lowrider wheels available in Los Santos Customs.

The Stinger GT, being a grand tourer, is a good performing car for its class. The in-game engine model shows a single overhead camshaft V8 engine, with 4 double barreled-downdraft carburetors. Unlike the standard Stinger, the Stinger GT has its engine mounted in a rear-mid longitudinal position, whereas the Stinger has the engine placed in front-mid position.

The car also features two side-rear mounted radiators, which strangely share the same model as the intercoolers featured on the Cheetah, Turismo R, Osiris and T20, however, intercoolers are typically only used on turbocharged vehicles, which the Stinger GT is not, leaving the only possibility of them being rear-placed engine radiators.

Despite Legendary Motorsport stating the Stinger GT has better performance than the standard Stinger, in-game testing has shown that there is no significant difference between the two, which leaves the player at the option of the player's preferable body style of convertible or coupe within the Stinger range.

Its apparent 320HP 3 liter engine pushes it to a stated top speed of 175 mph (according to Legendary Motorsport), with a stated acceleration time of 5.7 seconds. The vehicle's engine sound appears to be shared with the regular Stinger, both being the same as the Seashark sound. Traction is impressive, thanks to the rear-engine, rear wheel drive layout, which sends power directly to the wheels the engine is located upon. Recapping, the Stinger GT has a good top speed, and impressive acceleration. Handling is responsive and reliable, however, braking distance is bad. 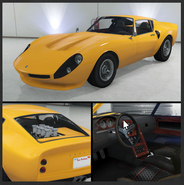 The Stinger GT on Legendary Motorsport in the enhanced version.

The Stinger GT on the updated Rockstar Games Social Club.