For other uses, see Stinger (disambiguation). Not to be confused with the Swinger, another classic sports car with a similar name in Grand Theft Auto Online.
“First manufactured in 1960, the Stinger quickly became a car synonymous with the hard-living Vinewood playboys of the silver screen. Literally hundreds of impressionable young starlets got drunkenly deflowered against their will on the hood of this beauty and then later ended up with a face through the windshield. $1 million buys you more than just a used car without power steering - it buys you a piece of history. The interior still reeks of bourbon and cigarettes.”
— Legendary Motorsport description.

The Stinger is a two-door sports car which first appeared in the classic Grand Theft Auto, and recurred throughout the series in different forms and designs. It is manufactured by Grotti in the HD Universe.

In Grand Theft Auto, the Stinger is based on the 1968-1972 Chevrolet Corvette C3, referenced also by the name of the vehicle. It has a long hood and two small hatches on the front, likely the pop-up headlights.

In Grand Theft Auto 2, the vehicle is based on the 1963 Corvette Split-Window and again, its Script Name is a reference to the Corvette Stingray (STINGRAY).

“What a great car. Always wanted one of these.”
— GTA Vice City Website.

In Grand Theft Auto III and Grand Theft Auto: Liberty City Stories, the vehicle is heavily based on two cars; the third generation Toyota MR2 and the 1996 Porsche Boxster. It also resembles the Dodge Copperhead concept car in its overall shape and especially on the back. The car is depicted with a generally boxier profile, rounded lamps, two frontal intakes and two rear exhausts. It is available with a solid roof or with an open top, and may spawn in various colours.

In Grand Theft Auto: Vice City and Grand Theft Auto: Vice City Stories, the Stinger resembles a 1968-1973 Ferrari Daytona Spyder, an apparent homage to Sonny Crockett's Ferrari Daytona Spyder replica and yet another reference to Miami Vice. The front of the car leans towards a wedge-shaped profile, while the rear assumes a more generic design, with split bumpers and square-shaped lamps. It is only available with an open top, and spawns in a variety of single colours.

A working name given to the Stinger in Grand Theft Auto III is "Shark", as evidenced in the "official" website for Capital Autos (seen here).

Manufactured by Grotti in Grand Theft Auto V, the Stinger assumes the design of a classic grand tourer, very derivative of 1960s Ferrari models. The overall design is heavily based on both the Ferrari 250 GT California Spyder and 1967 Ferrari 275 GTS/4 N.A.R.T Spyder, while the front lights appear to be inspired by the Ferrari 330 P4. The car also features design cues from the Intermeccanica Omega and the Intermeccanica Italia GT, also Italian sports cars.

The overall profile of the car is similar to the Vice City renditions, but assumes an older design. The front end is protected by a chrome bumper spanning the width of the car and part of the sides, along with two small grilles and a license plate. It has stacked circular headlamps located in chrome housings, while the bonnet features the manufacturer emblem on the front.

The sides follow a curved design on the front fenders and a slightly wider profile on the rear ones, while the greenhouse area is mostly predominated by chrome elements on the circular rear-view mirrors, door handles and trim around the windscreen. The driver side portion behind the cabin features an upper fuel cap.

The rear is more traditional, featuring circular tail lamps on the edges and a chrome bumper on the lower side. The boot's end houses a set of chrome plate lights besides the license plate and a chrome handle, along with silver "GROTTI" and "Stinger V8" badges.

The interior of the car is a derivative of the one used used in the Banshee, featuring the same dial layout and central console elements, although the dials are black. In addition, it replaces the carbon-fibre unit backing with a wooden/walnut variation. The corresponding Grotti badges can be seen on the steering wheel and the passenger-side portion next to the central console unit.

The car is available with a soft top or with no roof, which can be changed in Los Santos Customs. As of The High Life Update, this car is available for purchase with or without a roof. The primary colour of the car is applied on the bodywork, while the secondary colour is applied on the interior stitching. However, there is no way to change the vehicle's secondary colour, and is only dictated by the selected colour when purchasing it (i.e. buying the car in a red colour gives an orange colour for the interior stitching). It uses a set of wheels similar to the ones on the Z-Type and the Hotknife, being a derivative of the "Wired" lowrider wheels available in Los Santos Customs.

Both iterations handle great, respond well, and stick to the road.

In Grand Theft Auto III, its performance is better than most vehicles, but is the least powerful of all the 2-door sports cars, with little tendency to drift. Its Yakuza variant, the Yakuza Stinger, handles better and is all-wheel-drive, as opposed to the stock cars, which are rear-drive.

In Grand Theft Auto: Vice City and Grand Theft Auto: Vice City Stories, the Stinger is amongst the fastest and best handling cars in the game. The Stinger's FWD drivetrain may be unusual for a high-end sports car, but it allows the car to be more stable during hard acceleration and turning than the RWD drivetrains in some other sports cars (especially in rainy conditions). This attribute, along with the car's lack of understeer, makes the Stinger ideal for racing. The only flaw with the car occurs when one uses too much handbrake during turns, which will cause the Stinger to oversteer and overswing its rear end.

In Grand Theft Auto V and Grand Theft Auto Online, the car boasts a relatively high speed and acceleration, on par with several sports coupés such as the Feltzer. Its 3.0L V8 engine (according to the website), mounted in a front position, longitudinally, is capable of delivering impressive top speed and acceleration. At high speeds however, oversteer is noticeable, and the car has the tendency to fishtail when turning, and on some occasions powerslide off the road. The vehicle's durability is average, as the car can sustain multiple head-on collisions before failing. The acceleration is beyond all other Sports Classics, as well as its speed. Its braking distance is a let down, unlike the JB 700, it seems to take a while to fully come to a stop.

* Windows are only available if the No Roof modification has not been bought.

The "Shark", an earlier iteration of the Stinger in GTA III prior to the game's release. 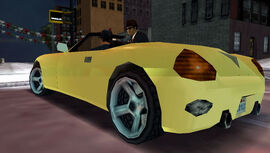 The yellow Stinger in a pre-release screenshot for GTA Liberty City Stories. 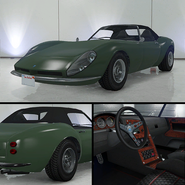 The Stinger on Legendary Motorsport in the enhanced version of GTA V. 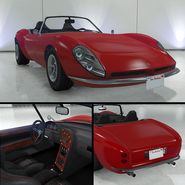 The Stinger (Topless) on Legendary Motorsport in the enhanced version of GTA V.

The Stinger on the updated Rockstar Games Social Club.

The Stinger in the cinematic preview on GTA V Rockstar Games Social Club.

The Stinger in the cinematic preview on GTA Online Rockstar Games Social Club.

The Stinger (Topless) on the updated Rockstar Games Social Club.

A variant of the Stinger used by the Sicilian Mafia appears in missions. They are uniquely grey.