GTA Wiki
Register
Don't have an account?
Sign In
Advertisement
in: Images Needed, Weapons, Weapons in The Ballad of Gay Tony,
and 7 more
English

The Sticky Bomb on the Rockstar Games Social Club website.

“A plastic explosive charge fitted with a remote detonator. Can be thrown and then detonated or attached to a vehicle then detonated.”

The Sticky Bomb is a C-4-like explosive with a tripwire-triggered mechanism taped onto it. When thrown, the bombs emit a steady beep and a yellow light flashes. When activated the beep rises in pitch and speed, and the light turns red, then after less than a second, they detonate.

The Sticky Bomb gains a new design and is now comprised of two M112 C-4 explosive sticks with a remote-controlled time bomb taped onto it. There is a small red light attached to the device to help mark it when placed and, like in its previous iteration, emmits a steady beep, though not as noisy.

The Sticky Bomb has the primary advantage of being a controlled explosive and having a controlled detonation, making it useful for timing explosives when the target is on the blast radius, which is similar to that of a grenade. As expected from its name, they can be thrown and stick to any surface they hit, which gives it another advantage over grenades as there is no need to be concerned they might bounce away from the target and either miss or worse, come back to the player and kill them in the process. Unlike Satchel Charges from Grand Theft Auto: San Andreas, these bombs do not stick to people. They can then be detonated by pressing Down on the D-pad or shooting them.

Up to 10 Sticky Bombs (2 in multiplayer) can be placed; throwing out the 11th (3rd in multiplayer) will cause the first one to disappear. The bombs have a 90 second fuse, so if an armed bomb is left undetonated for 90 seconds, it will automatically detonate. If the player is in a vehicle of any kind and they try to hold the sticky bomb until it detonates, it will not explode even after 90 seconds has gone by. It will start to beep slowly, and after about 60 seconds the beeping will get faster, but it will still not explode. If the player throws it out after holding it for a long time, the timer will reset as it is thrown out, so holding the bomb will not affect the time it takes to detonate.

Because of the beeping sound and the yellow light, the player might take difficulties to take out other players, as they can see or hear the bomb and they might either avoid passing over there or destroying them with another weapon, so the player may need to find alternatives. One of the best methods is that the player just need to open a car door (preferably to the side other players do not use to enter the vehicle) and stick the bomb to the inside of the door, so when the door closes, the bomb is inside the vehicle. This prevents other players from seeing the bomb.

The Sticky Bomb is no different from the TBoGT iteration. Although they cannot stick to pedestrians in Story Mode, they can stick to them, as well as other players in Online. The limit for placed bombs has been amplified to 20 (5 in Grand Theft Auto Online). When the limit is reached, a message appears on the screen indicating it, and, like in TBoGT, the first one disappears when the 21st (6th in Online) is placed. Unlike in TBoGT, they will not explode over time.

Sticky Bombs can be used as a cheaper replacement for the Car bomb in GTA Online. The player just need to open a car door (preferably to the side other players do not use to enter the vehicle) and stick the bomb to the inside of the door, so when the door closes, the bomb is inside the vehicle. This prevents other players from seeing the bomb, by applying the car bomb trick mentioned above, they can ensure no other players can see them.

Many players prefer this weapon in drive-bys, due to the fact that they deal a large amount of damage, can stick to any vehicle, and can be detonated at any time (which allows them to be used somewhat like landmines). However, the player must be careful to ensure that their own car does not get caught in the blast radius, if using them against a vehicle in close proximity. Another factor to take in mind is how fragile they are, as shooting them will cause them to explode. If they are placed onto a vertical surface and rammed by a car, they will detonate. 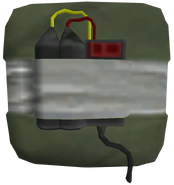 A "Fire Bomb" featured in The Bureau Raid, using a vertically stretched model of the TBoGT Sticky Bomb (PS3 and Xbox 360 version).

Franklin with a Sticky Bomb.

Aiming with a Sticky Bomb