Stick Up the Stickup Crew

Stick Up the Stickup Crew

“Normally I don't concern myself with professional thieves. You want to rob a bank, who am I to get in the way? Unless you hit one of my safety deposit boxes, or have something I want, then you have nothing to worry about. There's a crew down at the Port who have something I want, a shipment of arms I can use. Go down there and bring it back to me.”
— Description

Stick Up the Stickup Crew is a mission in Grand Theft Auto Online given to the player by Martin Madrazo. It is available from 1 to 4 players.

The team has to steal a truck full of powerful arms that Madrazo will need to rob a bank. The truck is situated on Chupacabra Street in the northern Elysian Island area, and the truck will be guarded by around 12 guards. After the truck has been stolen, a helicopter and a enemy car comes in to follow and try to kill the team. The team has to deliver the truck to Martin Madrazo's Lock-up up in the Grand Senora Desert to complete the job. 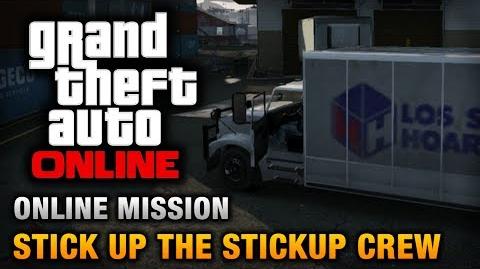