Steinway, as viewed to the southeast from the Concord Avenue - Franklin Street intersection.

Steinway is a large neighborhood located in the northwestern part of Dukes. It is bordered to the north by Dukes Bay; to the west by Franklin Street (the Humboldt River); to the south by the East Borough Bridge, Harrison Street, and Morris Street and to the south-east by Yorktown Avenue (East Island City); and to the east by Dukes Boulevard, Hewes Street, and the Dukes Bay Bridge (Meadows Park).

As an added note, the word "Stein" is German for "Stone". It is also a reference to the famous Steinway family of Astoria (Steinway's real-life counterpart), which built a sawmill, foundry, and streetcar line in Astoria.

Steinway is a heavily urbanised, working to middle-class area with copious amount of green space. Steinway Park takes up the entire western portion of the neighborhood (from Concord Avenue to Franklin Street/the Humboldt River). The area is strongly influenced by Irish architecture; With most of the homes in Steinway resembling middle-class terraced homes found in the city of Belfast. Steinway Park is linked to Dukes Park in East Island City through the Humboldt River promenade; this path tunnels underneath East Island City. All of the land north of Dukes Drive is also reserved as green space known as Gantry Park, and a cemetery. Central Steinway is home to a large amount of houses, complete with their own garages and miniature back gardens, as well as a few apartment buildings, and the Steinway Beer Garden. Finally, the only projects in Dukes; the Steinway Projects can be found in the north-eastern area of the neighborhood. Steinway is also territory of the McReary crime family.

Steinway draws heavily from the northwestern neighborhoods of Queens, New York, such as Astoria and Long Island City. The Steinway Projects are almost undoubtedly a virtual representation of the Queensbridge Project in Long Island City, while Steinway Park and Gantry Park are replications of Astoria Park and Gantry Plaza State Park, respectively. The name of the neighborhood bear similarities to several locations bearing the name in Astoria, including Steinway Village (an incorporated village of Queens), Steinway Street, and the Steinway Piano Company, which was founded and manufactured in Astoria.

The Liberty City Subway has a stop at the intersection of Dukes Boulevard and Morris Street (at the border with East Island City); however, it is closed for maintenance, so it is not in service. The closest in-service LTA station is Huntington Street, in Cerveza Heights. 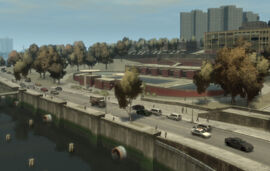 Steinway Park, as viewed to the northeast from the Humboldt River. 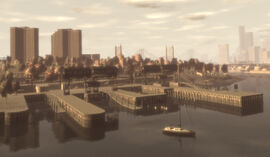 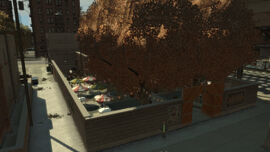