Staunton Island is also, up until 1998, the home of at least two Mafia families: the Sindaccos and the Forellis. Staunton Island has its very own Yakuza-owned casino, which cannot be entered.

South of the Callahan Bridge are the districts of Torrington and Bedford Point. Both are home to Staunton Island's massive skyscrapers and aimed at modelling on what is a mixture of Downtown and Midtown Manhattan today.

In the middle of Staunton Island is the districts of Belleville Park and Newport. A more moderate skyline compared to that of its roaring neighbors of Torrington and Bedford Point in Downtown, Midtown Staunton is home to several of Staunton's landmarks.

While Staunton Island appears to be named after Staten Island, its Midtown and Downtown areas are mostly based on Manhattan, New York City, while the Uptown areas appears to be a mix of Bronx (Liberty Memorial Coliseum), Manhattan's Riverside Park (Aspatria Waterfront Park) and, according to Rockstar's Q&A, might have inspiration from other East Coast cities (Philadelphia, Baltimore and/or Detroit). [1]

The island is considered to be based on Manhattan, while the name is based on that of Staten Island. It includes landmarks based on the real landmarks of Manhattan. However, some other places are influenced by other East Coast and Midwestern cities. [2] 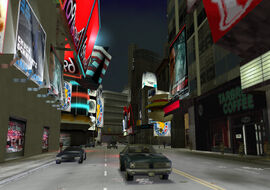 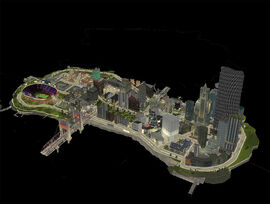 Staunton Island from above on the official Grand Theft Auto III website.