The Statue of Happiness in Grand Theft Auto IV.

The Statue of Freedom [1]
Lady Liberty [2]
“A gift from the French at the end of the 19th century, this iconic landmark evokes a bittersweet mix of patriotism and xenophobia.”
— Grand Theft Auto IV manual description

In The Ballad of Gay Tony, the "Celebinator" writes in his blog about the statue after his "helicopter tour" of the city (the last sentence in the post regarding the statue could be a reference to its beating heart). Also, through the article, The Celebinator mentions that her face reminds her of someone and that "if I was married to that cold slab of stone, I'd be off with any fat bird who'd take me." These might be further reference to Hillary Clinton and how her husband, former US President Bill Clinton, was caught in an affair with Monica Lewinsky.

“Statue of Grumpiness
The other day I had the unfortunate experience of getting up-close and personal with the Statue of Happiness. It's horrible! I could swear that disgusting strange smile on her face reminds me of someone, too. That's the face of a woman who needs some work done, or some action, or both! I mean, she is seriously living a lie, that one, and for what? She just stands there and does nothing! Reminds me of my mother. If I was married to that cold slab of stone I'd be off with any fat bird who'd take me. It's amazing that angry black heart of hers still beats in her chest.”
— The Celebinator

The tablet held by the Statue bears an inscription referring to the United States' treatment towards immigrants who entered the country seeking a better life, and closes with the country's date of independence from the British. It reads:

“Send us your brightest, your smartest, your most intelligent,
Yearning to breathe free and submit to our authority,
Watch us trick them into wiping rich people's asses,
While we convince them it's a land of opportunity.

Happiness Island, where the statue is located, is only accessible via helicopter, boat or by swimming. Algonquin is the closest island, and the nearest subway stop is Castle Gardens on the Algonquin Outer Line. Higgins Helitours is on the southeast side of Algonquin for a helicopter, and there are numerous boats at moorings on the west side of Algonquin. The island itself has a number of boats that spawn there, and also Forklifts. A random vehicle (usually a Futo, Blista Compact, Ingot, or Uranus) also spawns behind one of the sheds, and a Faggio spawns in a small area near the main plaza.

Inside the statue is a beating heart, one of Grand Theft Auto IV's Easter eggs and is among one of the first Easter eggs that were found in the game. The entrance is on the upper platform of the pedestal, right at the feet of the statue, which is only accessible by a helicopter.

The southern door leading to the heart has a sign: "No Hidden Content This Way". This is similar to the sign on top of the Gant Bridge in GTA San Andreas and The Hidden Sign in Grand Theft Auto III. Through the door there is a ladder going upwards into the body of the statue itself. At the top of the ladder there is a small platform with a large, beating heart chained to the inside of the statue. The heart is indestructible.

In The Ballad of Gay Tony, it is possible for Luis to pass out from drinking too many shots and wake up in this room with a parachute.

The statue as viewed from ground level.

The statue as viewed towards the northeast, showing its alignment in relation to downtown Algonquin.

Closeup of the statue's face.

The statue's tablet, complete with the inscription.

The Statue of Happiness at night.

The area inside the crown glowing at night. 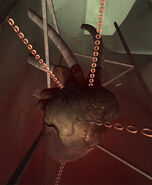 The "Heart of the City" in Grand Theft Auto IV.

The "Heart Of Liberty City" has lights shining on it from inside the statue at night.

The statue as seen from a public photograph display in Grand Theft Auto IV. Note the different face.

The Happiness Statue in Grand Theft Auto: Chinatown Wars. This artwork appears when Huang is dealing with a drug dealer in the island.

The statue in a Bravado TV commercial in Grand Theft Auto V.

The Heart of Liberty City in the movie "Capolavoro" in Grand Theft Auto V. 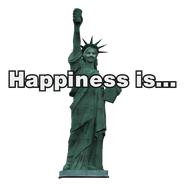 The graphic on the Statue of Happiness Tee in Grand Theft Auto Online.