It is located in East Holland, Algonquin, between Bismarck Avenue and Columbus Avenue, Topaz Street and Uranium Street. It is situated west of the East Holland Police Station.

The building is under the contract of Feinberg & Van Wyck Realty contractors and can be contacted on 555-555-3289, although the number is not recognized.[citation/verification needed]

The structure itself has 18 floors including the ground floor, with a large courtyard lined with flower beds and trees. Several stairways around the courtyard lead up from the roadside to the main entrance. The building is built on four large pillars which hold the main tower. The center of the building features a ground floor with transparent windows, allowing the player to see in, albeit the interior is empty and inaccessible. 9 floors up the building, large sections of the building overhang, reinforcing the idea of "impressive views" as the banners claim. 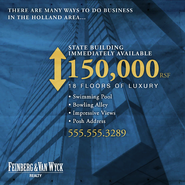 Poster seen on the side of the building. 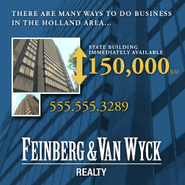 State Building in Grand Theft Auto: Chinatown Wars.
Add a photo to this gallery
Retrieved from "https://gta.fandom.com/wiki/State_Building?oldid=1114399"
Community content is available under CC-BY-SA unless otherwise noted.