Stanley is an associate of Gerald. He is taken hostage by the Vagos due to Gerald's hostile rivalry with them, to which Gerald orders the player to rescue Stanley and the package he was delivering in the mission No Hay Bronca in Grand Theft Auto Online. During the mission, Stanley can be killed while the player retrieves the package. If he survives, Stanley will act as a NPC follower (with his own health amount) and assist with the rest of the mission.

Stanley can sometimes be seen sitting down in the apartment complex of Gerald drinking a beer in Grand Theft Auto V.

Stanley meets with the Vagos. 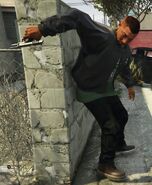 In action in No Hay Bronca. 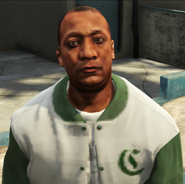 Stanley's appearance in the PS3/Xbox 360 version. 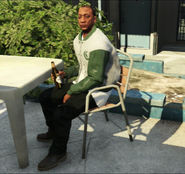