“If you took a cab or got arrested in the 1990s, there's a high chance you ended up in the back of a Vapid Stanier. Discontinued following widespread reports of fuel tanks exploding on impact in rear-end collisions. So try to avoid that.”

The Stanier shares its stock rim design with the Minivan. In IV, the Vapid-based Taxi and Police Cruiser share a heavy-duty steel rim design, wrapped in high-profile tyres and featuring protruding chrome centrecaps inspired by Ford's Type 146 centrecaps. This rim design is featured on several other vehicles with a similar purpose, such as the Merit-based Taxi, the Buffalo-based police cruiser, and the Police Interceptor.

The Stanier shares much of its handling profile with the Police Cruiser variant of the second genration. It has an above average top speed, powered by a modeled twin-cam straight-4 engine. It loses little momentum as it tackles sharp turns at speed, with noticeable body roll. Due to its RWD drivetrain, the car is also able to power-slide into corners readily.

The Stanier's performance in crashes remains stellar - being able to take multiple direct hits to the chassis, drivetrain, and suspension without failure.

Interior of the Stanier in the original version. Note the floating computer screen. 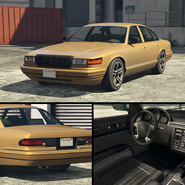 The Stanier on the updated Rockstar Games Social Club.

The Stanier in the cinematic preview on the Grand Theft Auto V Rockstar Games Social Club.

The Stanier in the cinematic preview on the Grand Theft Auto Online Rockstar Games Social Club.

Other than as a part of random traffic:

Service variants of the Stanier: