GTA IV
GTA V
For the mission in the first Grand Theft Auto associated with this vehicle, see Heist Almighty - Stallion.
“Get 'em while they're hot. The classic Stallion muscle car's been imported from Liberty City to Los Santos. You might find some baggies or baggy rubbers tucked into the back seat, but that's part of this lady's charm. She's a dime.”
— Southern San Andreas Super Autos description.

In Grand Theft Auto, the Stallion resembles a 1967–1969 Chevrolet Camaro. However, the hood is more alike Pontiac GTO.

Stallions are seen in a variety of single colors and with a hardtop roof.

In the 3D Universe, the Stallion appears to be based mainly on the 1969/1970 Oldsmobile Cutlass (also the Oldsmobile 442) in the front end, while the back end is closer to the '70-'72 Cutlass. The hood scoop seems to have been influenced by the 1968-1970 Pontiac GTO, which is a platform-mate of the Cutlass. The notchback roofline, the smaller size and the name could be nods to the 1st generation Ford Mustang.

All renditions of the Stallion remained largely the same, retaining the front bumper with fog lights, dual grilles, circular headlights, twin ram-air hood, square tail lights on either side of the rear bumper and twin exhaust pipes. However, there are small differences between each models, depending of the game's settings:

Liberty City and Vice City versions may spawn with an open top or soft top, while the San Andreas version features a hard top. The soft top always has a secondary color, but the hard top has the car's primary color.

In Grand Theft Auto IV, it is manufactured by Classique and resembles a much bigger muscle car rather than a Pony. The grille and lights remain almost unchanged, but the body more resembles a 1968–1969 Oldsmobile Cutlass; the rear end looks like that of a 1971 or '72 Cutlass (it says "STALLION" above the bumper much like it says "OLDSMOBILE") with extra lights. The headlights are surrounded by headlight bezels similar to those on a '68 Cutlass.

The Stallion assumes a similar layout to the 3D Universe renditions, only with a larger body and slightly narrower front. The front fascia retains the bumper, grille and headlight placement, though the lower fog lights are no longer present. The car also retains the twin ram-air hood and opens to reveal a V8 engine with a strut brace over it, while circular mirrors are seen mounted on the front fenders, just beside the hood. The cabin area adds rear-quarter windows and a passenger-side antenna next to the trunk compartment, while the rear bumper adds two rectangular turn signals between the square red tail lights and the central license plate, though it does not have any reversing lights (similar to the Intruder and the Contender). A single exhaust pipe can be seen on the driver side.

Again, the vehicle may spawn with a colored hard top or a black soft top, the latter being either folded up or down. It can spawn in a variety of primary colors for the body and the hard top, and uses a set of five-spoke wheels and medium-profile tires.

In Grand Theft Auto: Chinatown Wars, there are two versions depending of the platform:

The Stallion returns in the enhanced version of Grand Theft Auto V and Grand Theft Auto Online, this time manufactured by Declasse (albeit still possessing Classique badging on the car itself). It appears relatively unchanged in terms of design from its GTA IV counterpart.

It can be obtained in two variants, the stock car and the street versions, with the latter being available in hardtop and convertible forms. When purchased, the Stallion will always spawn without a roof. Currently, the soft-top/hardtop forms can only be found spawning on the streets in Grand Theft Auto Online. Since the Freemode Events Update, however, it is possible to buy the roof in Los Santos Customs, though it still does not offer any visual modifications.

Again, the car only spawns in a single color for the body and the hard top, and the rims were slightly changed, being similar to the "Kracka" rims seen in Los Santos Customs.

The Stallion is one of the fastest cars on the road.

Its handling varies in each game. In GTA III, GTA Vice City, and GTA Liberty City Stories, the Stallion has reasonable acceleration, though its rear wheel drive layout and huge amount of low-down torque meant it was easy to perform professional-grade drifts around corners, doughnuts and wheel-spin when taking off. The GTA Vice City Stories version is altogether slower than the other renditions, but its tail-happy traits remained. In San Andreas, it handles much like the Clover and Sabre (even having the same engine sound to the latter), but fishtailing rarely occurs.

Unlike most other muscle cars, the Stallion has a low-revving V8 that sounds more like an inline engine (except in GTA San Andreas), coupled to a 4-speed gearbox in a front engine, rear wheel drive layout. The engine sound is shared with the Manana, Perennial, and Idaho.

In Grand Theft Auto IV the Stallion is easier to steer, but it will occasionally spin out of control, especially in poor weather conditions such as rain. With good power, handling, and acceleration it is easily one of the top three muscle cars in Grand Theft Auto IV, thanks to its 5.7 liter (347ci) twin-cam V8 engine, the 5-speed gearbox and the FR layout. Care should be taken through corners though; despite having good grip, the Stallion is awful at keeping flat through corners. The Stallion can also be quite bumpy on the road. Braking is below average. Durability is poor, as the vehicle can only take few hits before catching fire.

The vehicle uses a loud engine sound, shared with muscle cars like the Sabre GT and the Dukes.

The Grand Theft Auto: Chinatown Wars rendition adopts a combination of performance traits of previous renditions, with high top speed and acceleration and good steering, but very poor grip as a result of excess torque, resulting in the car skidding frequently, even in slight turns. It competes with the Dukes.

In Grand Theft Auto V and Grand Theft Auto Online, the car shares the same engine and drivetrain, but sporting different performance, having worse acceleration than in GTA IV, but a higher top speed, and much better handling. The car no longer spins out of control when cornering at high speeds.

Again, the car has a 5.7 liter (347ci) twin-cam V8 engine, a 5-speed gearbox and an FR layout. It uses a low-revving sound shared with cars like the Buccaneer and the Blade. 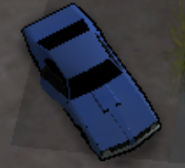 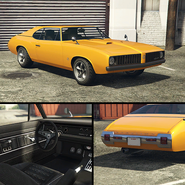 The Stallion on the updated Rockstar Games Social Club.

The Stallion in the cinematic preview on GTA V Rockstar Games Social Club.

The Stallion in the cinematic preview on GTA Online Rockstar Games Social Club.