Standard White - 100%
“Stafford drivers have a reputation for plowing through more pedestrians than any other consumer demographic. But don't trust the statistics: if you look closely, you'll see that the poor and disadvantaged are throwing themselves into the path of its cast iron radiator grille, in healthy competition for the honor of being mown down by something this magnificent.”

The Stafford is a vintage, ultra-luxury four-door sedan featured in Grand Theft Auto: San Andreas and Grand Theft Auto Online as part of the After Hours update, released on July 31st, 2018, during the Tale of Us Residency Week event. It is manufactured by Enus in the HD Universe.

The Stafford is notable for being significantly smoother, longer, wider and taller than most other sedans. The car features a square grille, square headlamps, rectangle tail lamps and silver bumpers. It is available in a variety of single colours.

The car returns again as a luxury Rolls-Royce inspired car, albeit assuming an older design, mainly based around the 1959 Rolls-Royce Silver Cloud. Both the front fascia and rear fascia of the vehicle are largely inspired by the Jaguar Mark IX, as indicated by the grille design and structure, the headlights, front and rear bumpers with overriders, trim around the car, partially covered rear wheel, and the rear light cluster. The front bumper also appears with additional lamps mounted onto it, and directional markers on top of the fenders, also inspired by the Mark IX. Some of the side profiling is also reminiscent of the Silver Cloud and, to a lesser extent, the Rolls-Royce Phantom V, featuring extensive fender lines and body curves.

The Stafford is distinctive by its classic styling and chrome elements around it. The front of the car is very long and is dominated by the tall grille, the chrome bumper with large overriders, and the circular headlamps with chrome details around them. The bonnet area features two engine compartments, a central chrome strip and a grille ornament.

The sides of the car uses curved, bulky fenders, together with flared arches, flared skirting area and rear body plates covering the upper third part of the wheel. Chrome details can be seen on the upper area passing from the grille to the door handles, as well as on the lower area passing from the front quarters to the rear end. The greenhouse area is again predominated by chrome trimmings around the windows, also featuring circular rear-view mirrors finished in chrome

The rear of the car is distinctively curved, featuring a large boot with chrome license plate lights and handle. The outer edges feature a dual set of upper amber lamps and lower red lamps, surrounded by chrome details. Again, there is a chrome bumper with large overriders. When the boot is open, it reveals an elevated compartment with a hatch, likely for the spare wheel.

Inside the car, the Stafford reuses the Roosevelt's interior, with small additions and removals; a chrome centre mirror has been mounted on the centre dashboard, a small radio set is attached underneath the dashboard, the gear shifter has been removed and ancillary control handles have been added to the steering column. The door panels also feature door cards with handles and window crank handles. Like the real counterpart, the Stafford features two chairs positioned closely together in the front and a bench seat in the rear.

The car's ride and brakes perform more smoothly when compared to other vehicles. The car's performance is average-to-good. With average acceleration and a good top speed, the car is considerably speedy. However, its heavy weight and rear-wheel-drive drivetrain may result in some significant oversteer, or even spin-outs when accelerating during a turn. Its height, combined with a wheelbase too narrow to compensate, makes the car somewhat unstable, and its durability is average.

It can be noted that driving the Stafford boosts CJ's sex appeal significantly, which makes it a car of choice to pick up girlfriends.

The Stafford appears to be powered by a V8 engine with a RWD configuration. Acceleration is terrible and top speed is somewhat below average. The car's low torque will make it struggle when climbing steep slopes, but this also results in minimal wheel spin when taking off. Braking is average. Handling wise, the steering feels firm and is adequate when slowly driving around corners, but tends to understeer at higher speeds. The suspension is rather soft and bouncy, as fitting for a vehicle designed for luxury. Body roll can be seen when turning.

Overall the Stafford is much better suited for cruising around at lower speeds and for situations where high intensity driving is not required. 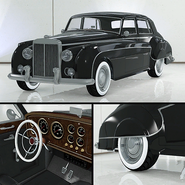 The Stafford on Legendary Motorsport.

The Stafford on the updated Rockstar Games Social Club.

The Stafford in the cinematic preview on GTA Online Rockstar Games Social Club. 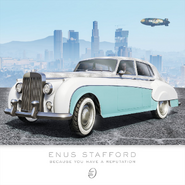 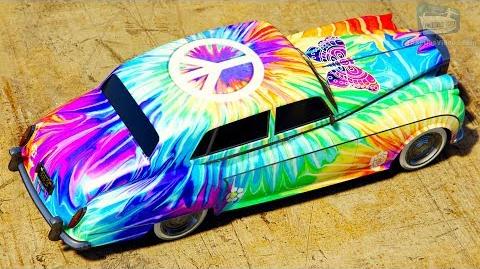