No
“Just like the standard Bravado it's another resurrected 1960s muscle car for the over-muscled EDM generation - but this time featuring exclusive Sprunk Livery! ”
— Southern San Andreas Super Autos description.

The vehicle is exclusive in Grand Theft Auto V for players returning from Xbox 360/PS3. It appears during the Stock Car Races and will become available in each protagonist's garage once the player wins the 4th stock car race.

The vehicle became available for everyone in Grand Theft Auto Online as part of the continuation of the Cunning Stunts update, which was released on July 26, 2016.

The Sprunk Buffalo is essentially a Buffalo S with a Sprunk racing livery, sharing the same derivatives. The stock car may be modified further in Los Santos Customs including the ability to respray the underlying color. The sponsorship decals can not be changed or removed.

Color distribution is changed, where the primary one is applied on the bodywork, while the secondary one seems to be only applied to the "Roll Cage" modification. It shares the same wheel design, albeit supporting a dedicated color (which assigns a green color upon purchasing it, but will lose it after applying custom rims).

The Sprunk Buffalo has the following minor sponsors:

Like with the four race vehicles, the Sprunk Buffalo includes a significant improvement on its braking capability, top speed and acceleration. The cornering radius and brakes are also improved, but not to the same extent as the aforementioned straight-line performance changes. Its mass was also reduced by 100 kilograms, compared to the base model. Despite these upgrades, there are still a few sports cars that can surpass the Sprunk Buffalo.

Like the normal Buffalo S, the Sprunk Buffalo is powered by a twin-cam, straight-4 engine, coupled to a 5-speed gearbox in a front-engine, rear wheel drive layout. It also shares the same high-revving sound.

*The Sprunk Buffalo is limited to only the Classic, Matte, and Metallic color options. All color choices keep the liveries on the car intact. 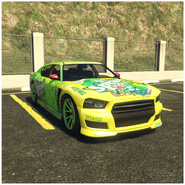 The Sprunk Buffalo on the updated Rockstar Games Social Club.