“If you want all of the taste with none of the waist. try our new improved Diet Sprunk. We replaced the sugar with cancerous neurotoxins — you'll never know the difference!”
— Sprunk on Bleeter

Sprunk (BAWSAQ : SPU) is a brand of lemon-lime soft drink featured in both the 3D Universe and HD Universe of Grand Theft Auto series.

Sprunk is a carbonated lemon-lime beverage claimed in a Grand Theft Auto: San Andreas radio commercial to contain "10 times the caffeine and sugar", mixed with mercury, ether, and benzene, and packaged in fragmentation grenade-shaped cans. The company's slogan since Grand Theft Auto IV has been "The Essence of Life".

Sprunk establishments are found in both Grand Theft Auto: San Andreas and Grand Theft Auto IV. In San Andreas, players can find a branch office of Sprunk in East Beach, Los Santos, as well as the Home o' Sprunk packaging plant in Montgomery, Red County. In GTA IV, opposite Honkers in Alderney, there is a large Sprunk billboard and an abandoned packaging plant can be found in Tudor, Alderney.

In GTA IV, Sprunk is also a sponsor of the Venturas Poker Challenge on Weazel and an extreme base jumping competition on CNT in The Ballad of Gay Tony, where 16 contestants go head-to-head and race to base jump off of certain buildings in Liberty City.

Sprunk returns yet again in Grand Theft Auto V, now playing a more notable role in the game. The player can buy stocks from them on the Bawsaq.com in-game website; A few vehicles (see below) can be obtained in Sprunk liveries, most likely used to promote the drink; Sprunk soda machines also return in GTA V, working the same way as they do in GTA IV.

In addition, "stalking" Sprunk's page on the Lifeinvader's real-life website grants the player a free vending machine order in GTA V, provided the player connects Lifeinvader on the Social Club.

Sprunk is an obvious parody of Sprite. Sprunk co-exists with eCola, a parody of Coca-Cola. However, in reality, Sprite is a brand owned by Coca-Cola. In Grand Theft Auto V eCola cans say "Canned under authority of The SPRUNK COMPANY by SPRUNK Enterprises Ltd, LC, USA" meaning eCola is owned by Sprunk.

The Sprunk sign in East Island City is based on a real-life sign for Pepsi Cola located in New York's Long Island City.

Sprunk Xtreme seems to be a parody of either Mountain Dew's MDX variant or the AMP Energy brand as both Mountain Dew and Sprunk are major sponsors of an action sports tour. The allusion to sperm may itself be a reference to various (false) urban legends connecting Mountain Dew to sperm loss.

The name is a play on of "Spunk", a slang term for semen. This is reinforced by the Sprunk motto "The Essence of Life". A synonym for "Essence" is "Substance" so the slogan is most probably referring to the fact that semen is the main substance required for reproduction in mammals.

Sprunk Fuel appears to be based on AMP Energy, baring several similarities on both the logo and can. It also features a different logo style compared to the other Sprunk variants. This new Sprunk text logo reappears later on the Sprunk livery for the Thrax as part of a pattern, but the livery still features the old regular Sprunk logo.

"Cherry Sprunk" is mentioned by Lester Crest in the beginning of the setup mission: Signal Intercepts, in reference to what the data they're stealing for Avon will tell them. This Sprunk flavor is very likely based on Sprite Cherry.
"it Might just tell us who's buying cherry Sprunk." -Lester Crest

The Sprunk Company (Sprunk Enterprises Ltd) is the manufacturer and owner of the Sprunk and eCola line of soft drinks, obviously being a parody on The Coca-Cola Company. The company is mentioned in small text on the eCola and Sprunk cans, but on the other hand the Orang-O-Tang soft drink features a different style in its packaging and doesn't have the spotted design like the eCola and Sprunk cans has, suggesting its not owned by The Sprunk Company.

Sprunk have a drinks booth at the North Point Mall:

The Sprunk booth at the North Point Mall. 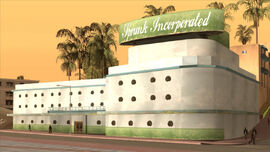 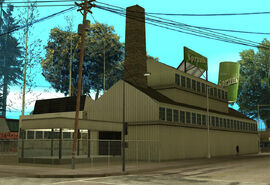 Sprunk have a large factory in Alderney. 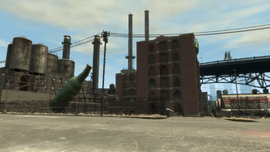 The Sprunk Factory in Alderney.

Sprunk have a website in GTA IV which can be found at www.sprunksoda.com.

The website explains what Sprunk is and what it consists of. The website also has tips, one claiming that sprunk can clean rust off cars, or strip the barnacles off the bottom of a ship. It also has an offer to win a free 2-liter bottle of soda, claiming contestants need to enter their name, address, social security number, credit card number, ATM pin code, their mother's maiden name and their date of birth.

Sprunk and Sprunk Lite cans at a 24/7 in GTA San Andreas.

Sprunk bottles found inside a bar in GTA San Andreas

Sprunk taps in a bar in GTA San Andreas. 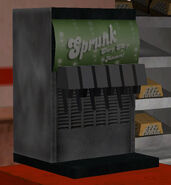 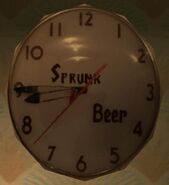 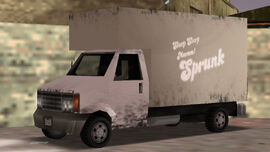 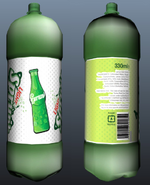 Sprunk can in GTA IV. 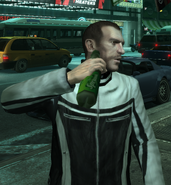 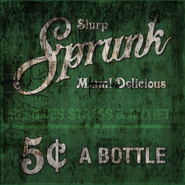 A Sprunk Bati Custom in The Lost and Damned.
Vehicles

Sprunk vending machine out of order in GTA V.

Sprunk can in GTA V. 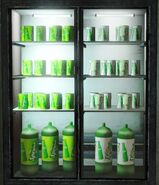 Bottles and cans of Sprunk.

An alternate version of Sprunk crate in GTA V. 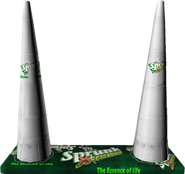 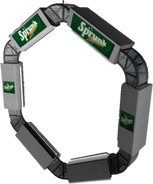 Sprunk Hunk, a painting by Al Alfaro at The Diamond Casino & Resort.

A Sprunk artwork at The Diamond Casino & Resort. 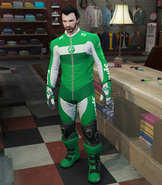 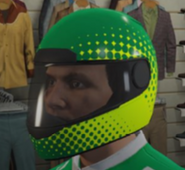 A Faction Custom Donk with a Sprunk livery in Grand Theft Auto Online.

An Alpha-Z1 with a Sprunk "The Essence Of Life" livery in Grand Theft Auto Online. (Rear quarter view)

A Havok with a Sprunk "The Essence Of Life" livery in Grand Theft Auto Online. (Rear quarter view)

An Ultralight with a Sprunk "The Essence Of Life" livery in Grand Theft Auto Online. (Rear quarter view)

A Jugular with a The Essence Of Life livery in Grand Theft Auto Online. (Rear quarter view)