The Spray Can in Grand Theft Auto:San Andreas.

The Spray Can is a weapon in Grand Theft Auto: San Andreas.

The Spray Can is basically an Aerosol spray that has different uses. The weapon is introduced to the player in the mission Tagging Up Turf. It is obtainable prior to completing the mission by picking it up from its various spawn locations.

The spray can is the first weapon received in the storyline.

The Spray Can is used mainly for spraying over other gang's graffiti, such as the Los Santos Vagos and Ballas.

It can also be used for killing someone by spraying onto a person. It chokes them until they are dead, but it is not very useful against multiple enemies at once. The Spray Can is also ineffective at long range. It is almost entirely useless as an actual weapon, since it is bested by even CJ's fists, even with low muscle without gym moves.

The icon for the Spray Can. 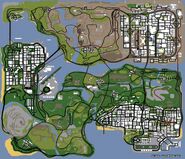 Spray can in the Johnson house.