The vehicle is based on the Amphicat ATV, a small six-wheel-drive amphibious ATV. It is depicted as a novelty vehicle with a rather unique design, with a small windshield, a single seat and six wheels.

It was also featured on a MeTV automotive news update, where it was said to be a car that thinks it's a duck and that it was perfect for people who live in a swamp.

The Splitz-6 ATV is capable of traveling on land and water, however, it drives slow on land and very slow on water, even slower than the player's swimming speed. Its rather poor armor makes this vehicle very susceptible in wanted levels, especially more than 2 stars.

According to MeTV, the Splitz-6 ATV has a 3 miles per gallon of fuel consumption. 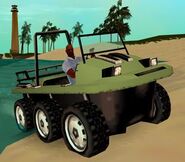