FREE (Included with the purchase of any Nightclub)

Standard White - 100%
“An unassuming van with all the potential to become the ultimate down-to-business machine for the club scene. Included free with any Nightclub purchase.”
— Career Builder description.

The Vapid Speedo Custom is a custom van in Grand Theft Auto Online as part of the After Hours update.

The vehicle is a modifiable variant of the Speedo, sharing the same profile and layout. The van received various changes in comparison to the regular model, where the front bumper features a shinier, chromed finish around the lower half and a singular flat meshed grille in place of the horizontal grille (likely to make room for the grille plating from the armor upgrades), while the hood assumes a bulkier appearance around the center. On the sides, the arches, particularly the rear ones, are extended and more defined, while the front quarter panels have vented sections with three horizontal chrome separations on them. The rear end of the van retains most of the features from the regular model, but the whole rear bumper has a shinier, chromed finish. The interior appears to be the same as the regular model, but the rear section and wheel wells are finished in a gray color instead of white. The vehicle can also be modified with an array of visual modifications, being armor plates, liveries and respray colors.

The primary color of the vehicle is applied to the entire body, while the secondary color is applied to the stripe passing around the sides and rear, just below the lower body line. It retains the same wheel design, being five-spoke angled rims with medium-profile tires.

The van can be equipped with either two front-facing machine guns, a remote machine gun turret resembling a Browning M2HB machine gun, or a remote minigun turret similar to a GAU-17/A gatling gun.

The Speedo Custom is overall superior to the original Speedo, with a slightly higher top speed and acceleration, together with better braking and handling overall. Still, the seeming lack of traction renders the van difficult to accelerate after being stopped, and the relatively light mass renders it unable to push other cars easily. The wedge provided by the "Heavy Armor Plating" upgrade allows the vehicle to push cars away slightly better, although it is still not very effective due to the light weight.

Despite having three different levels of armor upgrades, none of them make the van any more durable, as the van will still explode with only a single explosive near the body, unless the player is in a Sell Goods mission, which gains increased resistance and immunity to missile lock-ons. However, the cabin has bullet-resistant windows similar to vehicles such as the Schafter V12 (Armored) and the Baller LE (Armored), giving the occupants slight protection against most firearms before being shattered.

The Speedo Custom can be equipped with additional Armor Plating that will primarily affect the windows. Adding any Armor Plating will take away the ability for occupants to use throwable weapons.

The Speedo Custom has access to an array of weapons operated by the driver:

Note that, while both remote turrets have a limited elevation angle of about 20 degrees, the remote machine gun is able to aim up to 40 degrees with the "Hood view" enabled, making it deadly against targets almost above the van.

The Speedo Custom can only be modified at the Vehicle Workshop inside a Nightclub.

Close-up of the grille design.

The Speedo Custom on the updated Rockstar Games Social Club. 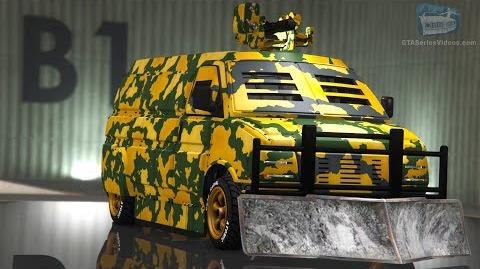