GTA Wiki
Register
Don't have an account?
Sign In
Advertisement
in: Pages with unsourced statements, Vehicles, Vehicles in GTA IV,
and 5 more
English

GTA IV
Not to be confused with Speeder, a car in the original Grand Theft Auto, or Speeder (boat), a boat in later games.
“No manners required.”
— GTA IV Advertisement.

The Speedo resembles a 2003-present Chevrolet Express van with elements from the 2005 Ford E150, but the front and back ends have been slightly altered.

The Speedo is a relatively simple van, where the front features a bulky black bumper with a license plate on the center, a square-shaped grille with the Vapid logo on the central horizontal divider, and silver housings with square headlights and rectangular lower lights, the outer ones being the turn signals. The hood is relatively simple and has a slanted profile.

The sides of the van makes use of small extensions/flares on the wheel arches, along with impressed lines on the sides and black door handles. The cabin area has black trim around the windows and two black rectangular mirrors near the A-pillars, while the rearmost area has a black strip surrounding the end of the cargo hold. Below the rearmost left section, there is the exhaust muffler and pipe exiting towards the left-hand side.

The rear end of the van is mostly occupied by the cargo doors, where the right one has a black section with the door handle and the license plate, while the left one bears a badge that reads "Vapid ST". The outer sides have vertical tail lights with a black surrounding, each one consisting of large red lights on the center and smaller turn/reverse lights on the upper/lower ends, respectively. Again, the van has a bulky black bumper.

The Speedo features various company names, such as Deliver Me Timbers, Easy Lay Carpet, Hello Tailor, and Nonna Pina's Restaurant. It also spawns in a variety of single colors for the body and uses five-spoke angled rims, wrapped in medium-profile tires.

In GTA V and GTA Online, the Speedo retains the same design as the GTA IV rendition, albeit it no longer sports company logos. Small changes have been made to the van, such as the grille having fewer separations and fully finished in black, and the badging on the rear doors (the left door has the Vapid logo and grey lettering displaying the car's name, while the right door has silver "VAPID" lettering). The van also has an unknown window tint applied by default.[1] In the enhanced version, the badge has been moved from the grille divider to the hood of the vehicle, and also also appears slightly dirty in the enhanced version, with some trash near the wheel humps.

Again, the van appears in a variety of single colors for the body and retains the same wheel design as in GTA IV, being five-spoke angled rims with medium-profile tires.

The vehicle is quite agile, thanks to its adapted suspension and weightless rear end. Powersliding is quite easy in this vehicle; however, in Liberty City's hilly terrain the Speedo is prone to bouncing about more frequently than other vehicles of its size. The engine is quite strong, leading to mediocre acceleration and a reasonable top speed. The lack of braking power, however, makes turning and braking simultaneously impossible, which is a big problem when slowing down into a 90 degree turn or any type of fast driving or racing. The Speedo is, after the Burrito, the second-fastest vehicle in the "van" classification, but it is the most maneuverable.

The vehicle is powered by what seems like a high-torque V8 diesel engine, with a 5-speed gearbox in a rear-wheel drive layout. The engine sound is shared from the other vans, namely the Burrito and the Pony.

The Speedo retains many of its performance qualities from its GTA IV appearance, although the reformed handling in GTA V and GTA Online results in the van gaining a suspension upgrade, to the point that the van feels more stable around corners, and thus its turning radius is greatly improved. The van has seemingly less traction than its previous appearance, sometimes resulting in the wheels spinning when setting off. The van is relatively durable during collisions, with no significant deformation occurring, even after multiple head on collisions and rolls, but the engine is still relatively weak compared to other vans in the game. It appears to have the highest top speed of vans in the game, wherein it seems to be superior to many average sedans in this field. Its off-road capabilities are significantly poorer than other vans due to the lower power engine.

Again, the vehicle is powered by a high-torque V8 diesel engine, with a 5-speed gearbox in a rear-wheel drive layout. The engine sound is relatively similar to the GTA IV iteration, also shared with vehicles like the Burrito and the Pony.

The Speedo has four possible liveries in GTA IV. The vehicle will appear in random colors with these liveries. 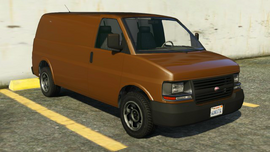 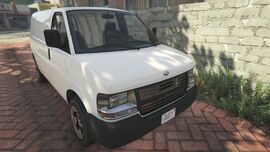 Advertisement for the Speedo commonly seen on billboards in the city.

A Speedo seen in the GTA Online trailer.

A blank-plated Speedo from a switch event. (Rear quarter view)

The hood badge in the enhanced edition of GTA V.

The Speedo on the updated Rockstar Games Social Club.

The Speedo in the cinematic preview on GTA V Rockstar Games Social Club.

The Speedo is part of vehiclemodelset "TRUCKS_DELIVERY" which commonly appears driving in and out of alleyways and parking areas.