This article needs more images of:
Rear quarter images for both GTA III and LCS reditions.

This article is about the speed boat. For the car, see Speeder.
“Drape a sweater over the shoulders and throw on some loafers without socks because you've made it! the Speeder is a classic Italian-style wooden speedboat that will make you feel like you're cruising the Mediterranean, quaffing Rosé and secretly hating yourself.”

In all 3D Universe games the Speeder appears in, it is designed as a low profile speedboat, having a modern and sporty appearance.

In the BradyGames guide for GTA Vice City Stories, the possible beta name for the Speeder was the "Ambassador", as seen through one of the images in the guide.

In Grand Theft Auto: Chinatown Wars, the Speeder seems to be based on the model featured in GTA Vice City, distinguished by the engine intake on the rear and the general windshield profile, as well as the antenna on the back. Because of the game's persepctive, the occupant's area seems to be smaller, as Huang sits almost on the middle of the boat.

Returning to Grand Theft Auto V and Grand Theft Auto Online with the Beach Bum Update, the Speeder is now designed as a classic speed boat. It is now closely based around the Coeur 290 Nighthawk and the Cherubini Classic 20.

It features a wooden finish on the upper side, with two lamps near the windshield and the "Speeder" badges on both sides of the bow and on the stern, as well as the Pegassi emblem in the upper side of the front hull and "Pegassi" markings on the sides of the stern. The occupant's area has been changed with leather seats and a rearranged layout, as the captain sits in an independent seat and the passengers on the C-shaped rear seating.

The Speeder in the Nintendo DS version of Grand Theft Auto: Chinatown Wars.

The Speeder on the Rockstar Games Social Club.

The Speeder on the updated Rockstar Games Social Club. 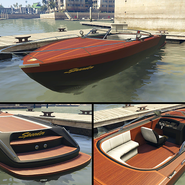 A screenshot featuring Michael De Santa piloting a Speeder while being pursued by a Police Maverick in Grand Theft Auto V.

A special version of the Speeder appears when purchasing the Pisces Yacht in Grand Theft Auto Online, added as part of the Executives and Other Criminals update. It spawns in the colors of the yacht, altering the color of the yacht will consequently alter the color of the boat and any other vehicles that spawn on the yacht.

While similar to the normal Speeder, the wooden furniture on the front area and the windshield's framing have been replaced with conventional panelling, while the "Pegassi" badges on the rear have been removed. The boat spawns in black by default, with a tri-color stripe running across the sides, however the boat's colors will always be determined by the yacht's color scheme in GTA Online. 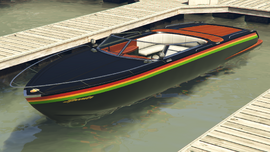