Wikipedia has an article on:
Special Weapons and Tactics

The SWAT is the second level of law enforcement that pursues the player. They appear once the player has reached a three-star wanted level.

SWAT officers in Grand Theft Auto III wear a Gen X helmet and goggles on top in case of fogging during tear gas release like a real life S.W.A.T. team.

They wear black sunglasses and turquoise coloured clothing. Their vests are blue and the helmets have "POLICE" printed on the front.

SWAT officers in Grand Theft Auto: San Andreas have a very dark blue appearance and wear a helmet with goggles, a mask and a tactical vest with "POLICE" decals on the front and back. GTA: San Andreas SWAT Officers also have kneepads and a holster containing a Glock pistol, though the Glock is never used in the game and is only seen in cutscenes.

Once the player has gained a three-star wanted level, they will rappel down from the police helicopters, and at a four-star level they will chase the player in their vans. They will also deploy spike strips to slow the player down. They will be deployed out of the helicopters by means of grappling, but only four at a time. Only in Grand Theft Auto: Vice City Stories will they attack the player while stationed in a roadblock. They are also well armored. Their vans are heavy, and are just a little slower than the Police Car. SWAT Teams always seem to aim for the player's tires and blow them out, making it extremely difficult to escape.

However, the dialogue in Grand Theft Auto: San Andreas suggests that the SWAT Officers are quite unprofessional. This is reinforced when the officers make quotes such as "Ouch, rope burning my hands", when they are roping from a chopper.

We are currently investigating allegations of corruption within rogue SWAT units in Vice City. Bribery thought to be rife. Remember to make sure this is covered up effectively to avoid voter dissatisfaction. 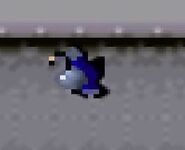 LSPD Police Car (End of the Line only)

Tear Gas (The Job only)

Pre-release screenshot of the SWAT Team in GTA Vice City.