The Sparrow is based on the Bell Model 47 "Sioux" (more specifically on the "G-series"), evidenced by the "soap bubble" canopy and the exposed welded-tube tail rotor.

The Sparrow generally assumes a lightweight appearance, feauring a glass cockpit and curved doors, as well as a small engine, long skids and an exposed tail boom with small fins and a tubular end for the tail rotor. The rendition in GTA San Andreas appears to have linear doors and square-shaped windows spanning the upper area of the cabin. The Sparrow is only available in a grey color in the Vice City renditions and white in the San Andreas rendition. Although not visible, a red secondary color is also listed in the files.

The Sparrow appears slightly more compact than its original appearance, with the tail being reduced in size and no longer sporting the original exposed frame. Despite this, it still appears as a compact helicopter featuring machine guns. It only appears during certain missions, alongside the Defender, a similar attack helicopter.

The Sparrow returns in Grand Theft Auto Online with the same design as the Sea Sparrow, being based on a Sikorsky S-300 with the engine from the Aérospatiale Alouette II.

The vehicle shares the same design and features from the pre-existing Sea Sparrow, but the pontoons were replaced by regular skids. Some tweaks were also made to the model, such as the skid struts being slightly more vertical, the blades are fully black and the circular detail on the engine bay is fully finished in silver. Like the Sea Sparrow, it uses a small instrument panel with the "Flyer" dial set on it, with the same layout as the Buzzard and its Attack variant.

The vehicle is set to spawn in a light grey primary color for the body and a black secondary color for the small fins of the horizontal stabilizers. However, the respray option from the Moon Pool workshop seems to apply to both primary and secondary at once.

Like the Sea Sparrow, the vehicle does not have any weapon, but can be equipped with one via customization, either a Minigun based on a GAU-19 gatling gun or a small missile launcher with four tubes inside.

The helicopter handles quite well in Grand Theft Auto: Vice City compared to the Maverick due to its low weight, but has taken a slight downturn in Grand Theft Auto: San Andreas. It can fit two people inside and is great for transporting a body guard in GTA Vice City or a homie in GTA San Andreas. While it is not as fast as the VCN Maverick or the News Chopper, the Sparrow is easier to use, being a perfect choice for practicing flying. The helicopter's weak point is its uncovered engine, and a few shots are enough to bring it out of the air, proving that it has no armor. If the player hits any door on the helicopter, it will be removed like in cars, making it the first helicopter to have removable doors.

The aircraft is powered by a single piston engine, and shares the engine sound with the Maverick and its variants.

The performance of the Sparrow is a bit different to the amphibious variant, as the reduced weight give it similar traits to the Buzzard and its attack variant. The helicopter's handling is very nimble, but remains relative stable (albeit slightly inferior to the Buzzard in that aspect), allowing the player to perform quick maneuvers. In addition, when flying at full speed, the aircraft will slightly climb, while the Buzzard will descend.

Being a standard helicopter, however, the Sparrow is unable to land on water, although it can still hover above water like most helicopters, which, due to the skids being part of the aircraft's body, it can keep the tail rotor away from the sea waves. The lack of performance upgrades also renders it inferior to a fully-upgraded Sea Sparrow.

Like its amphibious variant, the vehicle is powered by a single turboshaft engine, which produces the same rotor sound as the former, as well as most regular helicopters.

In terms of durability, the helicopter remains as vulnerable as the Sea Sparrow and other civilian helicopters in the game (including the Maverick and Frogger), as it has no protection for the occupants against gunfire and cannot withstand a single explosion before being destroyed. The lack of armor upgrades makes it even fragile to collisions and most form of attacks, and the rigidness of the skids means it can be easily damaged by hard landings, unlike most helicopters with similar setup. Just like other helicopters, after taking enough damage, the engine will begin to smoke, until it will shut down after smoking for two minutes and twenty seconds.

The aircraft is unable to equip countermeasures but its maneuverability should allow the pilot to avoid most standard homing missiles.

Like the Sea Sparrow, the Sparrow can equip a pilot-operated weapon mounted below the cabin, which only one can be installed at once:

The Sparrow can only be modified inside the Moon Pool workshop of the Kosatka. Unlike most vehicles, the vehicle has limited access to 30 Classic colors with the same cost.

A Sparrow in the Android OS port of Grand Theft Auto: Chinatown Wars.

A Sparrow shown in the update’s official artwork.

A Sparrow with the Homing Missiles upgrade. (Rear quarter view) 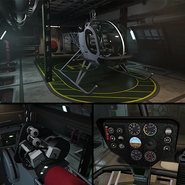 The Sparrow on Warstock Cache & Carry.

The Sparrow in the cinematic preview on GTA Online Rockstar Games Social Club. 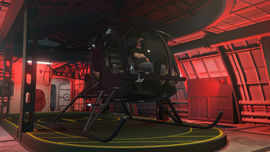 A Sparrow with folded rotor blades starting to leave a Kosatka.

The Sparrow only spawns in these areas (except the one in Downtown Vice City) after completing the mission Rub Out and entering them starts the Chopper Checkpoints side mission.