GTA Wiki
Register
Don't have an account?
Sign In
Advertisement
in: Gangs, Gangs in GTA IV, Gangs in The Lost and Damned,
and 5 more
English

Members of the Spanish Lords.

Red and Gold (used for Cavalcades and Primos)

The first Spanish Lords member to be encountered during the storyline in is Lyle Rivas, a body builder tied to illegal street racing and wanted by the LCPD for drug trafficking. Brucie Kibbutz wants him dead for apparently owing money to him. During the mission Search and Delete, he asks Niko Bellic to use a police car's police computer to locate Lyle and eliminate him. Niko successfully completes the task, finds Lyle at his apartment in Rotterdam Hill and kills him during a car chase.

Later Brucie asks Niko to expropriate Lyle's car, which was left in alley in Steinway. When Niko arrives on place and gets into the car, other members of Spanish Lords show up and attack him, before giving chase. Niko successfully delivers the car to Brucie's lock-up and evades the gang members. Soon after, Brucie also asks Niko to kill Lyle's cousin, "French" Tom Rivas. It is unknown if Tom had any connections with the Spanish Lords.

A notable former member of the gang is Manny Escuela, who turns out to be a community leader and cut his connections with the criminal underworld. Niko's next encounter with the Spanish Lords occurs on Manny's orders. Being obsessed with his desire to clean up the streets from the presence of drug dealers, Manny asks Niko to hit on bunch of the gang's members, who hang out in a garage on Windmill Street. Niko kills the thugs, while two of them attempt to escape in their Primo. Of note is that these gang members don't use designated Spanish Lords member models but generic pedestrian models, however due to their ethnicity and use of the gang's Primo, it is likely they were part of the Spanish Lords.

Three members of Spanish Lords, however, talk bad things about Escuela, doubting his masculinity due to his appearance on the TV. Manny asks Niko once again to help him with the problems. Niko follows members of the gang, who took the train in Algonquin, and ambushes them on the station in Broker. Members of the gang, going to their Emperor and dreaming about purchasing a Patriot, are all killed by him for a reward from Manny.

The Spanish Lords also instigate a drug deal with Elizabeta Torres, which ends up in betrayal on their part, leaving Patrick McReary in an ambush sat up by the Lords. Niko helps Packie escape from the ambush, killing the Lords on the spot.

In the mission The Snow Storm some Spanish Lords, who were hooked up with Elizabeta Torres by Little Jacob, try to rip her off big time by selling her cocaine to Angels of Death in the Old Hospital and putting the heat on her. Elizabeta asks Niko to handle the situation. Niko goes to the Old Hospital and breaks the deal, killing many Spanish Lords and Angels of Death in process. When Niko takes the cocaine, the NOOSE arrive on the scene due to a tip, ambushing everyone in the ruins. Every member of the gang is killed by either NOOSE or Niko during the shootout.

Niko Bellic also kills three other members of the Spanish Lords, the Trunchez Brothers, on orders of Dwayne Forge, who's strip club came under their control during his stint in the prison. After arriving at the club, he locates every brother by listening to conversations and kills them in a bloody shootout. This, however, leads to conflict with Playboy X, who considered the brothers as his partners.

In The Ballad of Gay Tony, they engage Luis, Armando and Henrique in drug wars. Ironically though, Northwood Dominican Drug Dealers can be seen socializing with Spanish Lords in the Spanish Lords territories (Ballad Of Gay Tony only). There is no hostility between either gang, in fact if the player attacks one or the other, nearby members of both gangs will attack the player.

In 2009 Spanish Lords have a conflict over turf with Wu "Kenny" Lee, who uses his nephew Huang Lee to get rid of them. He also can raid their warehouse to steal a Burrito containing drugs at any time. They serve as the antagonist gang during the beginning of the game. They seem to have lost the Cerveza Heights territory to the Triads, which results in them trying a few times to recover their territory, during the missions Under the Gun and Payback. They still seem to claim some businesses in Dukes, and remain in conflict with Wu Lee for a while, trying to torch some of his businesses in revenge for Huang doing the same to them and attempting to kill Kenny and Huang at Kenny's Warehouse. The last time they appear is during the mission Sa-boat-age, attempting to kill Chan Jaoming, leaving Huang to defend him from the onslaught.

The gang takes influence from eastcoast hispanic gangs such as the Latin Kings. They are one of the largest street gangs operating in GTA IV, having influence across virtually all boroughs (including Alderney) except Broker; having turf in South Bohan, Fortside, Cerveza Heights (which they lose to the Triads by 2009), East Holland and Alderney City; they maintain a strong street presence within these territories. In the Alderney City turf, since they share their turf with the Korean Mob, they don't attack each other and may even drive around in cars with Koreans in the passenger seat and both will attack the player if the car is damaged. They will however attack each other if the player provokes a shoot out or when a member of one gang punches a member of the other. Spanish Lords wear black and gold, also red and blue, as in addition to their gang colors, they proudly wear clothes depicting the Puerto Rican flag. Some are seen wearing t-shirts with the word "Boricua" printed on them, a term that derives from the pre-columbian Taino Indian language of Puerto Rico, which means Puerto Rican. Fishnet shirts and leather jackets are popular as well. Most often, the Spanish Lords are seen driving in Cavalcades and Primos painted metallic red with gold rims and trim. In Chinatown Wars, they drive beige Dukes muscle cars with better handling and a red underglow. They also use an orange/white Burrito to transport drugs. Members often sell Coke and rarely Ecstasy, which they also buy for huge prices.

There are four sets of Spanish Lords members:

Some members of the Spanish Lords don't wear gold, but the Spanish Lords usually can be seen wearing it as their primary color. Sometimes, if you hit a car belonging to one while he's in it, the gang member will come out with a Knife. At night they usually walk around with Micro-SMGs and Pistols in case of fights.

Their favorite radio stations are San Juan Sounds, The Beat 102.7 and Alchemist.

Their name - Spanish Lords - is a play on their real life counterpart - the Latin Kings. Both gangs flash black and yellow and both have Puerto Ricans as the majority of its members (Chicago Latin Kings are mostly Mexicans, New York Latin Kings are mostly Puerto Ricans). They may also be based off of Associacion Ñetas due to the fact that some members flash the said gangs colors such as those on the Puerto Rican flag and even the flag itself. This is not unusual as Rockstar mixed up several gangs' traits from their real life counterparts to avoid favoritism.

Members of the Spanish Lords. 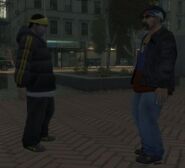 Two members of the Spanish Lords. 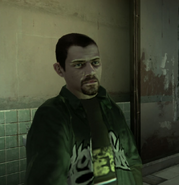 A Spanish Lords member talking with a Korean gangster in Alderney City.

The modified variant of the Cavalcade driven by the Spanish Lords. (Rear quarter view)

The modified variant of the Primo driven by the Spanish Lords. (Rear quarter view).

Huang Lee protecting Chan Jaoming from the Spanish Lords in the mission Sa-boat-age.