For the company, see Spand Express.

No
The Spand Express is a delivery truck in Grand Theft Auto: Vice City.

The Spand Express is a variant of the Mule, displaying noticeable differences to the front fascia and a Spand Express delivery company livery. It is available in a variety of single colors applied to both the cab and the cargo hold. 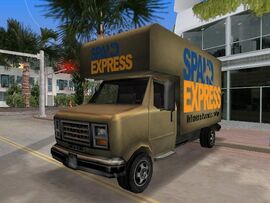 The Spand Express truck is notably rare, since it cannot be seen driving around the city, unlike the Mule. However, there are two specific opportunities to acquire a Spand Express, for the player to store in a garage: