Space Monkey 3: Bananas Gone Bad is a arcade minigame developed by Pixtro. It is available in the Arcade in Grand Theft Auto Online.

The game is a side scrolling Shoot 'em up game, with elements of a Japanese "bullet hell". According to the opening crawl, Dr. Dank has hijacked all cargo spaceships from the Ecuadorian 5 quadrant and used his "transmorgification" gun to turn bananas evil, and it's Space Monkey's job to stop him. There are 5 stages, each with its own boss. Each stage is full of powerups that offer both different gun types and abilities such as a shield or a nuke to kill all enemies on screen. 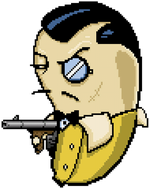 "Youz about to sleep with the fishes Space Monkey!"

Smoothie is a 20's themed banana with slicked hair, mustache, and monocle. Shoots waves of purple bullets from a tommy gun and launches Cherry Bombs at the player. Five small banana ships circle Smoothie, which regenerate after all are destroyed. 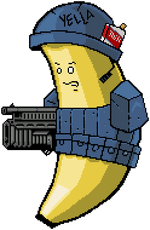 Marine is a banana dressed in a classic military outfit. "Yella" is written on his helmet, where he also holds a pack of Redwood Cigarettes. Launches purple bullets and small missiles from his gun at the player. When Marine reaches half of his health, a Chestburster banana comes out of his chest and attacks the player with waves of green goo. 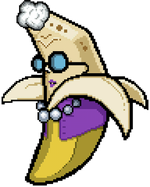 "I may be old and bruised, but I've dealt with your kind before!"

Granana is an elderly woman banana with a wig and pearl necklace. She both shoots red and purple bullets and shoots large red lasers from her glasses when they flash. Attempts to block shots from the player with bursts of light. Her wig can detach from her head and attack the player with bullets of its own. 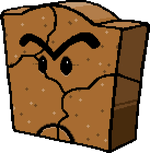 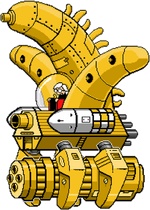 The player must fight each previous boss over again in this stage before approaching Dr. Dank himself. Dr. Dank controls a large ship consisting of multiple bananas. A detachable minigun will occasionally float around the edge of the stage and shoot at the player before reattaching to the ship.

There are three challenges available in this arcade game. Special T-shirts will be awarded to the player if they manage to complete each one of them. Completing all challenges will also award a trophy in the Arcade Trophy Case.

This challenge requires the player to survive any stage without taking any damage. This is best done on the first stage, simple stay on the left of the screen and focus on not getting hit. Upgrading your weapon and powerups can make the challenge easier.

Completing this challenge awards the player the Space Monkey 3 Tee.

This challenge requires the player to score 3.000.000 points in a single game. Just grab every powerup you see on screen, especially health pickups as they grant you 50.100 extra points. You will also get extra points every time you complete a stage without getting hit (300.000 points) and/or without dying (200.000 points). Make sure you have at least 2.250.000 points before facing the final boss because without the "no damage" and "no death" bonuses you will only get 750.000 points for defeating Dr. Dank.

This challenge requires the player to complete the game without the use of any powerup or pickups. This is the hardest challenge in this game and is highly recommended to complete it normally a couple of times before trying this challenge to get the hang of what you are about to face. The key is to never stop shotting and keep your eyes manly on your space shit to avoid incoming hits. Your health bar will always be replenished at the beginning of each stage so don't worry if you get hit, just make sure of not losing lives. Remember you get an extra live for every 600.000 points you make, so try collecting as many extra lives as possible to make the last stage easier.

Completing all three challenges awards the player with three t-shirts (Space Monkey Boss Fights Tee, Radioactive Space Monkey Tee and Space Monkey Art Tee) and a banana shaped trophy in the Arcade Trophy Case. A copy of this trophy will also be available in the player's Penthouse to be used as decoration. 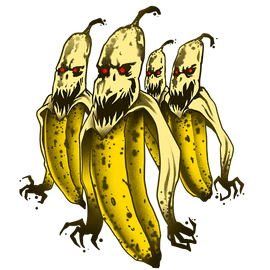 The graphic of the Bananas Gone Bad Tattoo.
Add a photo to this gallery

Retrieved from "https://gta.fandom.com/wiki/Space_Monkey_3:_Bananas_Gone_Bad?oldid=1237734"
Community content is available under CC-BY-SA unless otherwise noted.