Standard White - 100%
“It's an iconic American image... A cop in sunglasses and unnecessarily tight pants, cruising down a dusty freeway on a Sovereign motorbike, pulling over female drivers and offering them two ways to pay their ticket.”
— Southern San Andreas Super Autos description.

The Sovereign is essentially a civilian variant of the Police Bike, sharing the initial design and most of its features. Notable differences are the removal of emergency lights and the mounted megaphone on the right, as well as the "POLICE" marking on the windshield/visor. The original blue emergency lights beside the license plate found on the police variant were replaced by standard red lights, while the fuel tank features WMC markings on either side. It can also spawn with a tinted front windshield.

The Sovereign always spawns with a patriotic livery that cannot be removed or edited, although files reveal it spawns in white. It shares the same wheel design as the police variant, albeit featuring whitewall tires.

Its performance is identical to the Police Bike and handles much like the Bagger. It has an excellent top speed, but acceleration leaves much to be desired. The bike gets most benefit from the performance upgrades available in Los Santos Customs, since these are mostly focused on acceleration. The motorcycle is quite heavy, and as a result, it is not as nimble and maneuverable as other lighter bikes in the game. It has a large turning radius. 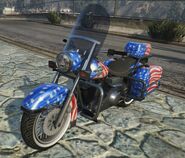 Front quarter in the enhanced version, with a tinted windshield. (Rear quarter).

The Sovereign spawning in The Paleto Score on the way to Paleto Bay. 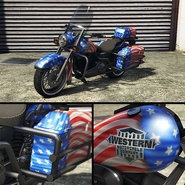 The Sovereign on the updated Rockstar Games Social Club.

The Sovereign in the cinematic preview on GTA V Rockstar Games Social Club.

The Sovereign in the cinematic preview on GTA Online Rockstar Games Social Club.