Red (for the Jacks) and purple (for the Nines).

The Southside Hoods, made up of two subdivisions: the Purple Nines and the Red Jacks, are a set of prominent African-American gangs in Shoreside Vale, Liberty City.

In Grand Theft Auto: Liberty City Stories, set in 1998, they are assisted by the Leone Family in taking Wichita Gardens as their turf and driving out the Forelli Family. At this point in time, both gangs were allied and acted as a single gang.

By the time Grand Theft Auto III takes place in 2001, the Nines begin selling SPANK on local streets. The Redjacks, particularly their leader D-Ice, are against the drug and narcotic business and start a war with the Nines. After performing a drive-by on the Nines, using RC Bombs to destroy their armored vans, stopping D-Ice's Infernus from being destroyed and collecting some platinum from a crashed airplane Claude and D-Ice's Brother defeat them in a mêlée battle.

Curiously, the Red Jacks and Purple Nines do not attack each other on the streets, and will even assist each other if one is wounded or in battle, pertaining to all gang member characters being modeled after Southside Hoods. To cover up the error in the plot, D-Ice warns Claude that if he shoots at Nines, some Red Jacks would assume they were under fire and shoot at him as well.

The favorite radio stations of the Southside Hoods are Game Radio, MSX FM, K-Jah, Rise FM and The Liberty Jam. 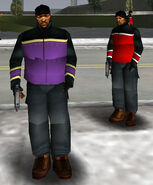 The logo for the Purple Nines subsection.

The logo for The Red Jacks subsection.

The gang's vehicle, the Hoods Rumpo XL, in GTA III.

The Hoods Rumpo XL in GTA Liberty City Stories.
Add a photo to this gallery

Retrieved from "https://gta.fandom.com/wiki/Southside_Hoods?oldid=656486"
Community content is available under CC-BY-SA unless otherwise noted.