The apartment complex is briefly featured in the mission "The Paleto Score", in which Michael, Trevor and a third gunman leave from the adjacent Blaine County Savings Bank after having robbed it, armed with miniguns and dressed in heavy body armor. They walk through the street, shooting at police cars and policemen, before Trevor shoots down a police helicopter, which loses control, crashes into the apartment building's roof and comes to rest in its swimming pool. The trio briefly walk through the apartment's bottom floor and past the helicopter wreckage, as they continue fending off the police. 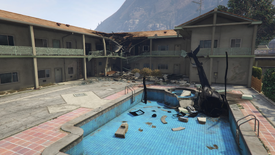 Destroyed helicopter found in the swimming pool after The Paleto Score.
Add a photo to this gallery

Retrieved from "https://gta.fandom.com/wiki/South_Seas_Apartments?oldid=1096283"
Community content is available under CC-BY-SA unless otherwise noted.